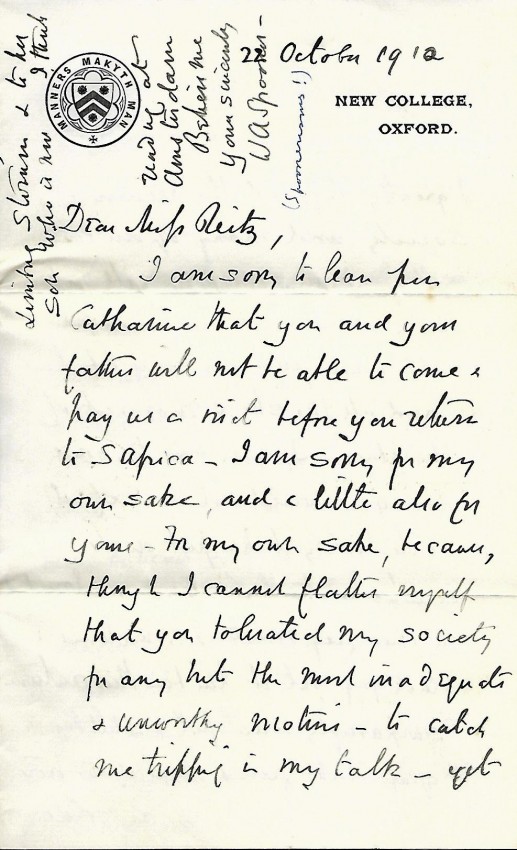 A fine 4pp. 8vo. als. to Miss Reitz (Bess Reitz - daughter of Orange Free State President F.W. Reitz), dated 22 October 1912, on a New College Oxford letterhead. Regarding a failed proposed trip to Oxford by the recipient "I am sorry for my own sake, and a little for yours - For my own sake , because, though I cannot flatter myself that you tolerated my society for any but the most inadequate and unworthy motives - to catch me tripping in my talk - yet I greatly enjoyed the pleasure of your Society and many of our long talks - I am sorry you will not see Oxford, and our beautiful old house and our way of life and all the stir and movement of the place ............". He goes on later to write "We are all a little uplifted to have the Prince of Wales here as a student and a very unpretentious student too,............,and I think that Magdalen College may well be pleased that the King should think that us in duce at Magdalen were part of the best education he could give his son........". He talks of a South African student returning to South Africa "with a little eutic(?) loyalty because he has been at College with the King's son. I am keeping this autumn the 50th. anniversary of my first arrival in Oxford. In these fifty years I have never missed a single term except the last. I have travelled a good deal in Canada, the United States, in Norway, Sweden &ampDenmark, to Constantinople ....................., but the working year I have spent in Oxford and for nearly thirty four years it has been my regular home, an uneventful life & yet in it's own way full of variety and many interests.". Altogether a wonderful letter.

Spooner (1844-1930) was lecturer at Oxford's New College and an Anglican priest, but he is primarily known for his verbal gaffes. An absent-minded professor, Spooner reportedly had a tendency to mix up the consonants in his sentences, leading to such timeless gems (called spoonerisms) as "The Lord is a shoving leopard" (loving shepherd), "It is kisstomary to cuss the bride" (kiss the bride), "Let us raise our glasses to the queer old dean" (dear old Queen). Interestingly, he refers to this in the letter on offer (see extract above) where he says ""to catch me tripping in my talk".

The letter is folded and in fine condition and is in the original envelope. Someone has neatly penned (Spoonerisms!) on the front page.