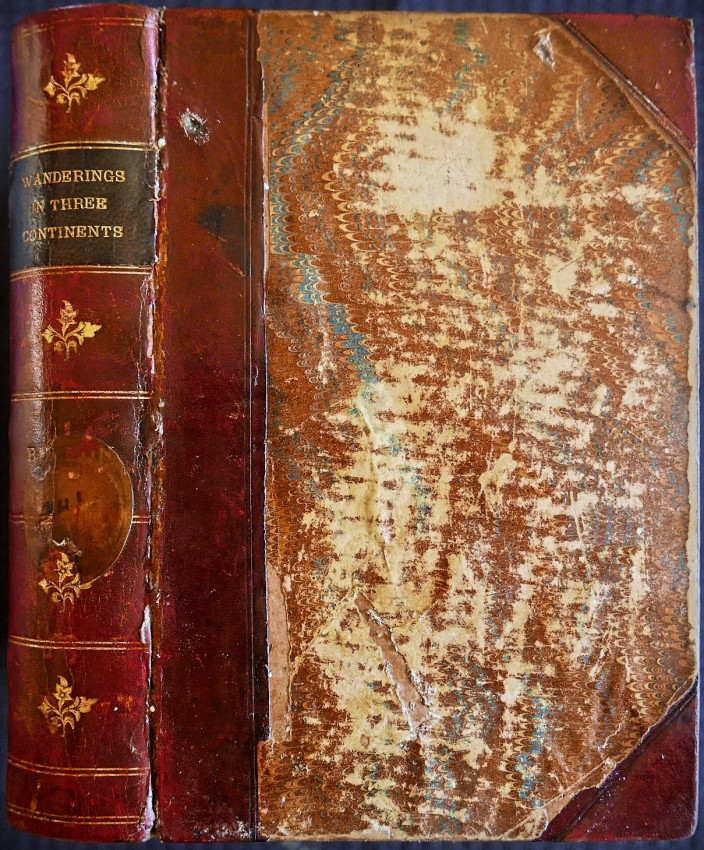 xiii plus 313pp.  Half leather over marble boards and gilt lettering and decorations on the spine. With photogravure portrait frontispiece and other illustrations by A. D. McCormick. 8vo.

Evidence of repair to spine hinge. There is also a small round hole penetrating the leather and first printed section in the gutter, not affecting the text. See accompanying photos. Otherwise internally bright and clean.

SCARCE FIRST LONDON EDITION. This posthumous volume of essays reveals Burton "in the aspect in which he was known best to the world--as a traveler and explorer." Contained within are Burton s writings on travels and explorations in El Medinah and Mecca, Harar, The Heart of Africa, The City of the Mormons, Dahome, The Congo, Brazil and Syria. Most of the essays were lectures that Burton delivered before a variety of geographical and scientific societies in London, Brazil, Bath, Damascus, and Edinburgh. They serve as a superb introduction for the lay reader to Burton s travels, and are presented in a much less scholarly format without annotation than his longer works on these subjects. Originally they were intended to be included in Lady Burton s Memorial Edition, but she died before its completion. W.H. Wilkens had issued his first edited collection of Burton s works in the publication of THE JEW, GYPSY, AND EL ISLAM. He was pleased by the success of that publication and set about compiling the materials for this his second volume. It spans works from Burton s most active periods roughly from 1853-1870. A fine collection, and now a scarce find, the volume consists of eight important essays. "When all is said and done, the most fruitful years of Burton s career, the richest in promise and performance, were those that began with the pilgrimage to Meccah and ended with his recall from Damascus. They were the very heart of his life: they are the years covered by this book".