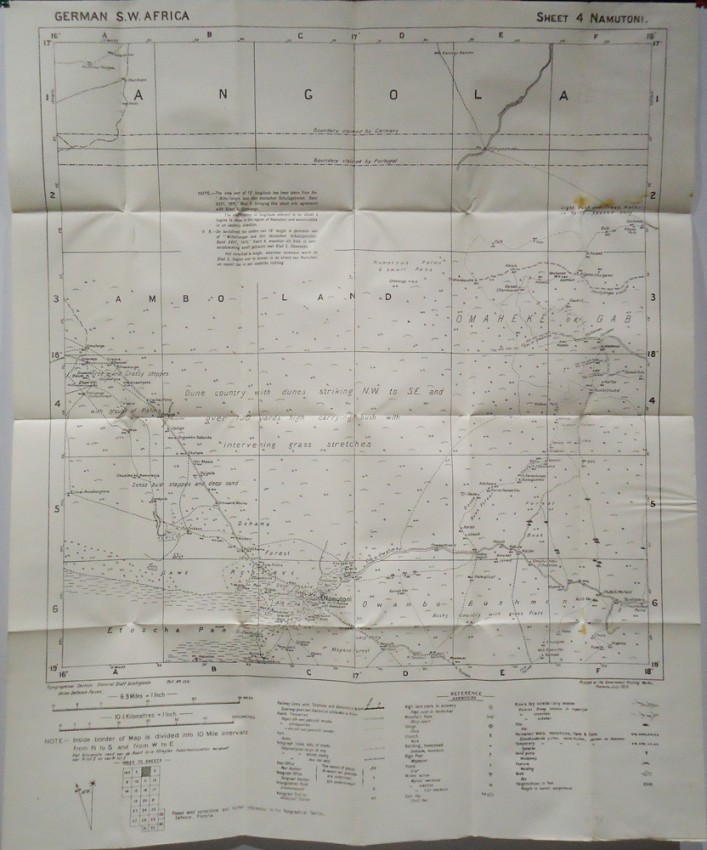 11 individual maps which form part of the series of war maps of German South West Africa. It is an incomplete set. They are all mounted on linen except for Abbabis, which is unmounted. Kubas and Gr. Barmen have water stains on the outer folds, otherwise all in very good condition.

All these maps were compiled with the assistance of the Topographical Section of the Union Defence Force and printed in Pretoria by the Government Printing Works 1914 – 1915.

Jacobs (A.) Topographical mapping support in the South African Military during the 20th century: The Union Defence Force: (UDF) was established in July 1912 and two years later the UDF was subjected to its first campaign, the distant conflict in Europe bringing the invasion of German South West Africa. Although sources regarding this and the subsequent campaigns of the First World War are vague on the mapping support available to the South African forces, a few points may be deduced.

Firstly, for the German South West Africa campaign, General Louis Botha utilised existing lines of communication for the launch of attacks. This campaign was largely conducted according to the old Boer doctrine, with scouts undertaking the reconnaissance and then presenting briefs to their commanders. https://core.ac.uk/download/pdf/37350650.pdf

Printed in Pretoria by the Government Printing Works 1914 - 1915

MAP - AFRICA INCLUDING THE MEDITERRANEAN