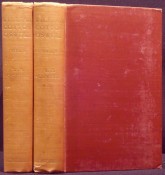 The story of his life with certain correspondence and extracts from the private journal of David Livingstone, hitherto unpublished, by his eldest son W. Edward Oswell.

With an Introduction by Francis Galton. Portraits, Maps and Illustrations in two volumes.

The life of English explorer William Cotton Oswell (1818–93) was marked by adventures and discoveries. At nineteen, he left Essex for Madras, where he worked for the East India Company and became a renowned elephant catcher. Due to poor health, he was sent to South Africa, the 'empire of wild sport', where he specialised in hunting and exploration. He discovered the River Zouga and Lake Ngami during an expedition across the Kalahari desert, and travelled to the Zambezi River with Scottish missionary David Livingstone.

Originally published in 1900, this two-volume biography was written by Oswell's eldest son. Since Oswell kept no diary, his life is here reconstructed through the many letters he sent to his family and friends. Volume 1 focuses on Oswell's youth, his medical training in India and travels in Africa. Volume 2 includes time spent working in hospitals in the Crimea in 1854-5.