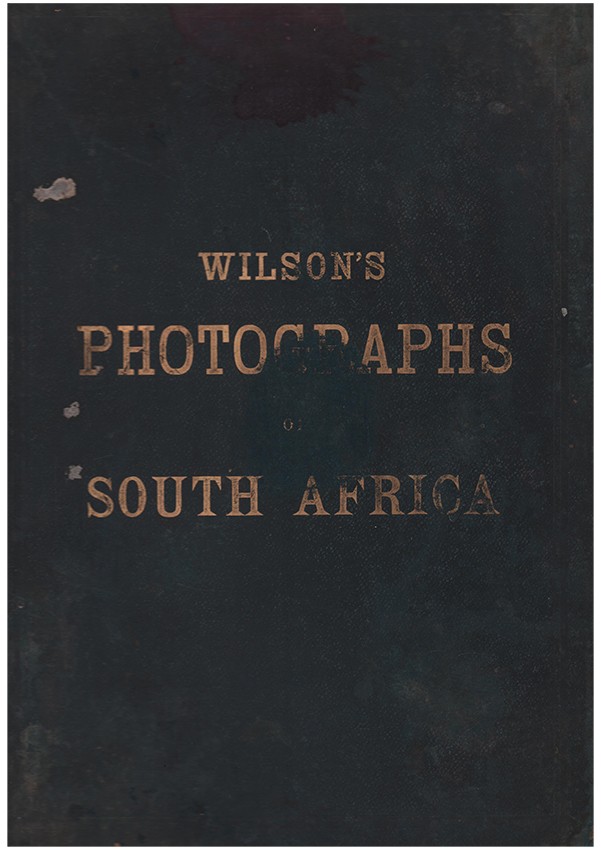 105 photographs of South African interest mounted on interspaced leaves of an album in which 42 leaves are empty. The album is titled gilt on the upper cover, which is now faded, the boards are scuffed and very worn, and the front cover is starting to detach at the hinge. The quality of the photographs is good.

All the photographs are undated (circa 1890's), but many are titled at the bottom and include a number (the number denotes the particular copy) and the initials G.W.W. Several photographs have no markings on them. They include buildings and landscapes of all the major cities in South Africa, 24 ethnographic images and photographs of wild animals in a zoo.

Also included is a folder of 65 loose photographs - many of them relating to the Anglo Boer War. It is possible that they were originally inserted as part of this album.

Cape Argus 3 September 2015. Photography made images available to ordinary families and self-taught photographers used it to produce "likenesses" of important people and loved ones. Next, attention turned to cityscapes, landscapes and tourist attractions (domestic and foreign), but cameras were cumbersome and the production and processing of glass plate negatives wasn't for the faint-hearted.

By the 1880s enterprising firms had started to print stock images which could be sold to travellers and collectors at home and internationally. They were available in various sizes and were transferred to postcards when these became popular in the early years of the 20th century. The photographic process was perfected at a time of Western exploration and was often used to record exotic places and carefully-posed examples of "native life".

Picturesque views by early South African commercial photographers like Barnett, Pocock and Ravenscroft are prized today, but they faced stiff overseas competition, notably from the Wilson family of Aberdeen, Scotland.

George Washington Wilson (1823 - 1893) trained as a portrait miniaturist but he subsequently turned to photography and became Photographer Royal for Scotland in 1860. He employed competent men to run his portraiture business while he devoted himself to landscape photography in Britain and commissioned photographs from across the world.

"GWW" images were produced at the rate of a million per year in a factory in Aberdeen and sold - mounted or unmounted - in a great variety of formats, including silver prints, platinotype prints, bromide prints, opalines, medallions and lantern slides at prices that started at sixpence. Selected items were also marketed in albums.

At the time of his death, the firm was one of the largest of its kind in the world. George's son Charles, and senior staff photographer Fred Hardie toured South Africa twice, penetrating as far as modern Botswana and Zimbabwe. Their images were listed in an extensive catalogue published in 1901.

The Wilsons knew their market and their photographs projected an ideal uncrowded world in which poverty and misery scarcely existed, although they spiced this bland fare with a few items of cultural or ethnographic interest. Their prints survive in personal albums, antique shops, private and public collections and at the University of Aberdeen. Scenic views dominated.