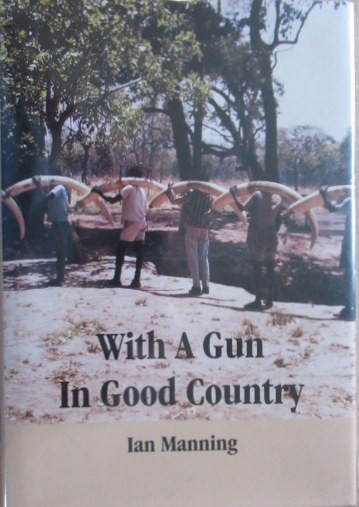 With a Gun in Good Country covers Ian Manning's life first as a professional game cropping ranger, then as a professional or white hunter, and later as a wildlife biologist. The good country through which he traversed includes Zambia, Congo, and Botswana.

Through a dazzling and almost unique series of stories Manning presents his experiences while hunting alone, with other professionals, and later with paying (and some non-paying) clients.

With a Gun in Good Country is written about that splendid period before the poaching onslaught which almost closed Zambia and continues to the granting of her independence. It then goes on to recount Manning's experiences in Botswana, Congo and briefly in South Africa.

The way of life described herein is now almost irrevocably changed and virtually gone from the hunting scene. These treasured recollections reflect times of loneliness, hardship, not a few misspent years, and also of many friendships, as well as, of course, memorable big game hunting adventures. Altogether they form a kaleidoscope of contrast which many people say is what makes life worth living. All the stories are invested with that magic felt by everyone who knows Africa, especially from the days of its more silent history.

Memories of Africa-Hunting in Zambia and Sudan.( Signed and Numbered 303/1000 copies)

Shoot Straight and Stay Alive - A Lifetime of Hunting Experience