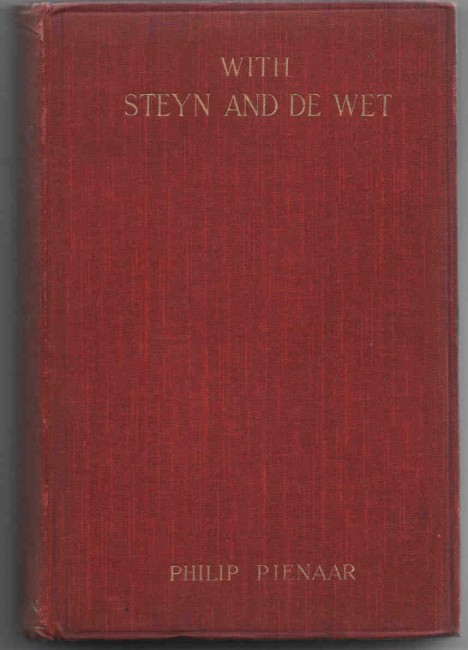 With Steyn and De Wet

Email or share
Crown 8vo; original red cloth, lettered in gilt on spine and upper cover; pp. (vi) + 173 + (i) + 48. Spine a bit sunned, and very slightly frayed at head and tail; some foxing to endpapers and edges, a little spotting elsewhere; binding slightly slack. Good to very good condition. (Hackett, p. 176; Mendelssohn II, p. 166; SABIB 3, p. 680) 'The author [of the Transvaal Telgraph Service] asserts that the war will never be over in the hearts of the Boers, who, he maintains, have been embittered by the farm-burnings, and by the way the system of the concentration camps has been carried out. He affords information respecting many smart telegraphic tricks by means of which the British plans became known to the enemy, resulting, in many cases, in grave disasters to their troops, and he states that at the time of Colonel Spragg's misfortune at Lindley "most of the British telegrams passed through our hands before reaching their destination." Pienaar fled to Delagoa Bay after the battle of Machadodorp, but he was not allowed to recross the frontier, and was finally deported with other Boer refugees to the convent of Thomar in Portugal.' - Mendelssohn. An edition of 1900 is listed in Mendelssohn, but the date seems doubtful, as some events described seem to belong to a later phase of the War. The more comprehensive SABIB notes no such edition.