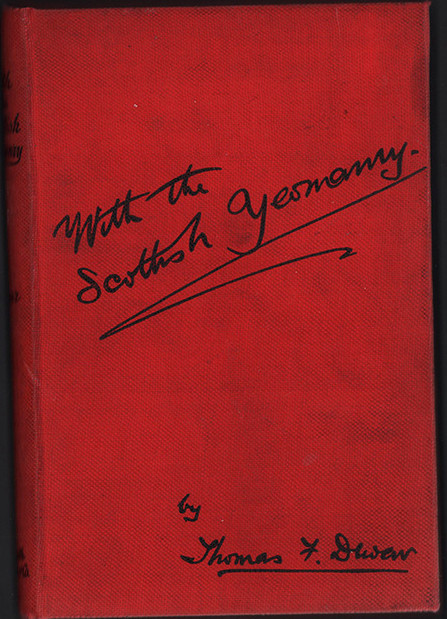 WITH THE SCOTTISH YEOMANRY

Being a reprint, somewhat altered and extended, of letters written from South Africa during the War of 1899 -1901.

Mendelssohn (Sidney) South African Bibliography volume 1 page 459:'These letters were originally published in the Arbroath Guide. They were written with’ the intention ‘of informing those among the readers of that newspaper, who were interested in the Scottish Yeomanry, of their fate and fortunes in South Africa.’ (Author’s Note).

The author gives detailed descriptions of his part in the war. For example, during the Free State campaign he writes: ‘Acting on instructions from Lord Roberts, we have been burning the farms of the unrepentant. Theoretically, it is wise policy; strategically it is necessary; in practice, it seems harsh and cruel. Yesterday a farm in the Doornberg was visited. The farmer, his wife, and his daughters were all there. Some of us entered, and one of the daughters was playing “Home, sweet home,” on the piano. The Boer was brought down to camp to interview the General. He goes, it has been decided, to Ceylon. By evening the smoke of the burning farmhouse, piano and all, was rolling and curling upward like a cloud between us and the sunset sky.’