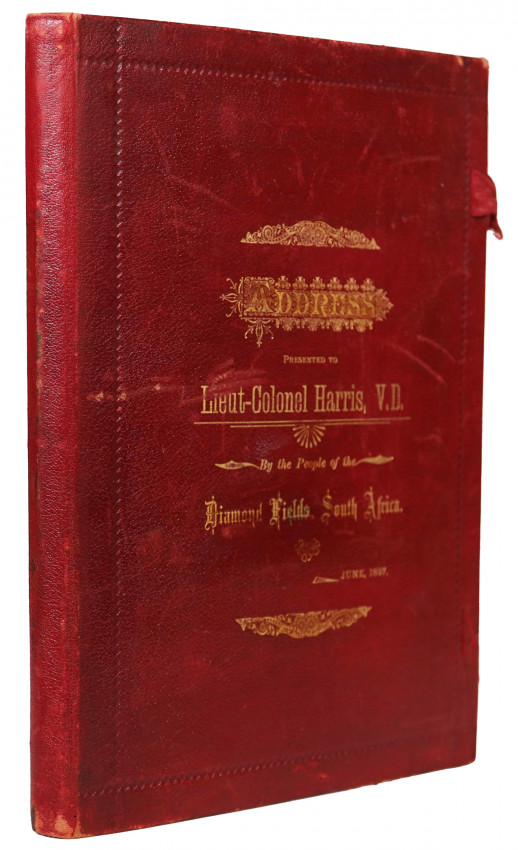 Several items pertaining to Sir David Harris comprising of photographs, a map, a letter and an Address presented to him on his departure from Kimberley.

The contents are as follows:

Address presented to Lieut. Colonel Harris VD by the people of the Diamond Fields South Africa, June 1897, bound in full red leather titled gilt on the upper cover with red cord ties, which are frayed and broken, in recognition of the services rendered to the people of the Diamond Fields on his departure from Kimberley. It is presented in calligraphic style with 6 pages of names entered in the document.

VD denotes The Volunteer Officers' Decoration, post-nominal letters VD, which was instituted in 1892 as an award for long and meritorious service by officers of the United Kingdom's Volunteer Force.

A hand drawn map marked ‘strictly confidential’ in an envelope addressed to Colonel Harris showing the position of the Kimberley Town Guard during the Siege of Kimberley. The names in bold below are specifically mentioned on this map.

Sir David Harris wrote his memoirs Pioneer, Soldier and Politician which is digitised as follows:
https://www.angloboerwar.com/books/64-harris-pioneer-soldier-and-politician

This collection has a portfolio of 16 of the photographs (formerly unidentified.) These all appear in his book, and have been subsequently identified from this source, digitised in the first chapter as follows:
https://www.angloboerwar.com/books/64-harris-pioneer-soldier-and-politician/1381-harris-contents-illustrations-and-preface

5 large mounted photographs of buildings – Lilelenfeld Brothers and its interior, a group photographs and a portrait of Max Samuel.

There is a detailed biographical sketch in the Dictionary of South African Biography vol. 1 pages 351- 352.

He was educated at Coxford’s College, City of London. In 1871, at the age of 19, he emigrated to South Africa. Making his way to the ‘Diamond Fields’, he invested in a claim in the Dutoitspan Mine, which he worked with moderate success. Meanwhile he learned the business of diamond buying and got employment as a buyer; eventually setting up on his own account. He later acquired new claims and became an associate of Cecil John Rhodes, and in 1897 was made a director of De Beers Consolidated Mines Ltd. He was subsequently Chairman of De Beers, and other mining companies, retiring in 1931

Became Major in Kimberley Regiment in 1890. Became Lieutenant Colonel commanding Griqualand West Brigade in 1896 Commanded the column that quelled the native rising in Bechuanaland (24th December 1896 - 30th July 1897) qualifying for Cape of Good Hope General Service Medal. During 2nd Anglo-Boer 1899–1900 he commanded Kimberley Town Guard during its defence and was Mentioned in Despatches; made CGM in thanks.]

Harris was elected a member for Kimberley in the Cape Legislative Assembly in 1897, and was re-elected in 1904. He retained his seat at the Union in 1910, and retired in 1929 as the longest serving member Harris was a keen and long serving Volunteer soldier. In 1876 he answered a call for volunteers for the 9th Kaffir War. He became a Sergeant in the Dutoitspan Hussars and went on active service with them. He became Paymaster and Quartermaster in the Diamond Fields Horse in 1877, and Lieutenant in 1878. He served as Adjutant under Sir Charles Warren. He was mentioned in despatches and was awarded the South Africa Medal 1877-79 with a clasp for the Gaika-Gealeka campaign. He subsequently took part in the Griqualand West campaign of 1878. On 13 August 1888, Captain Harris became the Commanding Officer of the Victoria Rifles, until he resigned in October 1890. In December 1890 he became Commanding Officer with the rank of Major, of the Kimberley Rifles. He was promoted to Lieutenant-Colonel in May 1894 and remained C.O. until December 1895. In January 1896 he became commander of the Griqualand West Brigade. He took part in the supression of the Bechuanaland Rebellion of 1896-97, for which he was awarded the Cape of Good Hope general Service Medal with one clasp. Lieutenant-Colonel Harris was awarded the V.D., this notified in the Cape of Good Hope Govt. Gazette of 8 December 1896. Harris took part in the Boer War 1899-1902 when he served in the Kimberley Town Guard. For his services he was mentioned in Lord Robert’s despatch (London Gazette 19 April 1901), was appointed a C.M.G. (1900), and was awarded the Queen’s medal with one clasp and the King’s medal with two. On 1 January 1903 he was appointed Honorary Colonel of the Kimberley Regiment and remained such until his death. Colonel Harris was appointed a K.C.M.G. in the Coronation Honours of 1911.

STORM OVER THE TRANSVAAL - First Edition (1955)

Cloud Over Kenya + Wide Horizon + Valley of the Eland

The Art of Zakkie Eloff