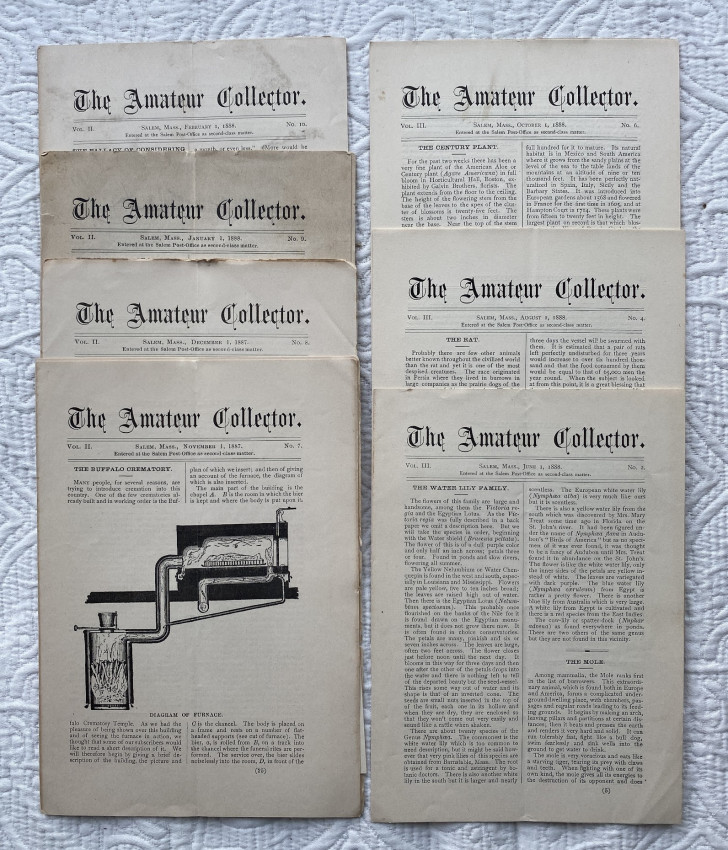 Very rare self-published teenage science journal: this selection is relatively substantial – it is also worth noting that none of the present issues seem to be present in the incomplete AAS set ?

Notes after examining another longer run  of this journal: the attribution of the editorship to John G. Morse (starting when he was 14 or 15) is due to a couple of facts and an inference: 1. the published address for ‘The Amateur Collector’ is ‘Salem, Mass., P.O. Box 268’, the same address is used in a ‘classified’ ad. in vol.I #2 ‘Five varieties of Japanese stamps / given for a perfect Indian implement /  with locality named. / J.G. Morse, / Box 268. Salem, Mass.’  2. The Society’s ability to attract top-notch lecturers (see below), of the quality of Professor Morse (1838-1925), Jeanette expedition survivor Raymond Lee Newcomb, and print collector and Unitarian Minister the Rev. Benjamin F. McDaniel. Prof. Morse is probably the greatest ‘catch’ – this feat would clearly have been made much easier if the editor of the journal was the Professor’s son John. At least one of the lecturers also contributed articles to the present work: ‘The Tunguses’ (p1, of vol.I, #3) is a brief description of an indigenous people which the writer noted he had encountered ‘in Siberia, during the winter of ’81 and ‘82’. Raymond L. Newcomb writes about the Tunguses quite extensively in his book about the Jeanette expedition (Our Lost Explorers: the narrative of the Jeanette arctic expedition. [Hartford, Ct.; 1883]).  It seems likely that Professor Morse also provided material. “The Cuvier Natural History of Salem is about to make its first public appearance in the form of a paper … [The Club] has existed under three different names – Nature Club, Royal Nature Club, and its present title…. March 5, 1881, two boys interested in Natural History met in an abandoned hen-coop, and then and there planned out and formed the beginning of a club which with increased numbers has had its regular weekly meetings up to the present time, and doubtless done as much work on proportion to its advantages as bodies of men of larger growth and wider experience. As the years have gone by, the number has been increased or diminished as circumstances have demanded: there have been in all ten members, now there are six; but it is safe to say these six boys are thoroughly interested in all they undertake and each tries his best to do some real work in the branch of Natural History which especially attracts him. … Lectures for the benefit of the Club … have been given at different times by Prof. E.S. Morse, Mr. Raymond L. Newcomb and Rev. B.F. McDaniel. Meetings are held every Friday night and they are conducted with as much formality as the regular meetings of the Essex Institute or any other organization.” (The Amateur Collector, vol.I, #1, p. [2]).