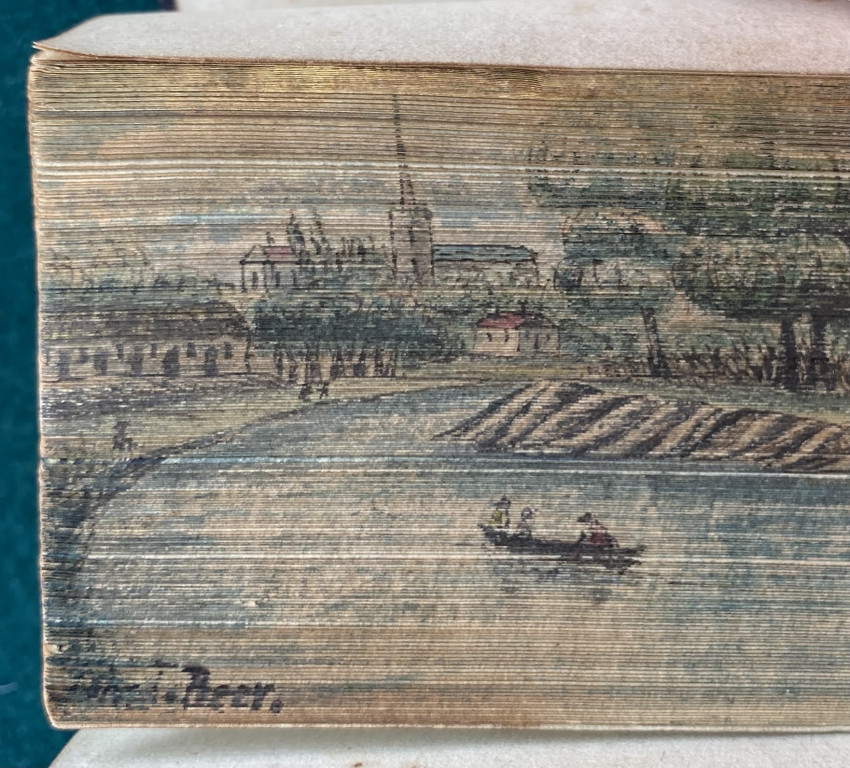 An interesting work by an author who went on to write a biography of Alexander Hamilton, with an attractive signed fore-edge painting by John T. Beer. Jeff Webber published a monograph on Beer and his fore-edge paintings. The present work is not in Mr. Webber’s catalogue raisonné (based on the Sotheby 1903 sale of Beer’s library), but Mr. Webber (from images) is going to add details of the present work ‘to the archives of the supplement to [his] … Beer book.’

Source for fore-edge: wood-engraved headpiece, titled ‘Ross Bridge’, on p.178, vol.II, “Our Own Country. Descriptive, Historical, Pictorial. London: Casselll, Petter, Galpin & Co., Issued in parts: the Bodleian received part one in May 1879. ‘Notes and Queries’ for May 1886, records that Cassell’s had just issued part XVI including ‘the Wye from Ross to Monmouth’.

“John T. Beer was a successful Merseyside clothier and an avid book collector, who turned to fore-edge painting after his retirement and produced hundreds of works between 1884 and 1900. As he was not a professional painter working on commission, Beer was able to select books from his own collection, including several incunabula, and decorate them to his own taste.” For other works by Beer see Jeff Weber’s work “The Fore-edge Paintings of John T. Beer; a biographical & historical essay followed by a catalogue raisonné based on the sale of his library.” (2006).

DNB entry:  WILLIAMS, JOHN (1761–1818), satirist and miscellaneous writer, best known by the pseudonym of ‘Anthony Pasquin,’ born in London on 28 April 1761, was sent in 1771 to Merchant Taylors' school, where he suffered chastisement for an epigram upon Mr. Knox, the third master (Robinson, Register of Merchant Taylors' School, ii. 134). At the age of seventeen he was placed with a painter, but he soon abandoned the pursuit of art in order to become an author and translator. When he was no more than eighteen he wrote a defence of Garrick against William Kenrick [q. v.], which procured for him the great actor's friendship. About two years afterwards he went to Ireland, and during his residence in Dublin he edited several periodical publications. Having attacked the government in the ‘Volunteers' Journal’ during the administration of the Duke of Rutland, a prosecution was commenced against him in 1784, and he was obliged to decamp, leaving the printers to endure the judgment (Gilbert, Hist. of Dublin, iii. 320).

In the same year (1784) he was associated with (Sir) Henry Bate Dudley in conducting the ‘Morning Herald,’ but a violent quarrel breaking out between them, Williams wrote an intemperate satire on his antagonist, for which he was prosecuted. The action was not proceeded with, however, in consequence of the intervention of some friends. In 1787 Williams accompanied his friend Pilon to France, and on his return he started a paper called ‘The Brighton Guide.’ He next settled at Bath, from which city he was also under the necessity of withdrawing precipitately. For some years he contributed theatrical criticisms to some of the London newspapers, and in this capacity he was the terror of actors and actresses, good and bad. In 1797 he appeared in the court of king's bench as plaintiff in an action against Robert Faulder, the bookseller, for a libel contained in Gifford's poem, entitled ‘The Baviad,’ where, in one of the notes, the author, speaking of Williams, observed that ‘he was so lost to every sense of decency and shame that his acquaintance was infamy and his touch poison.’ In this cause the plaintiff was nonsuited, solely on account of the proof that was given of his having himself grossly libelled every respectable character in the kingdom, from the sovereign down to the lowest of his subjects. Lord Kenyon, who tried the case, said: ‘It appears to me that the author of “The Baviad” has acted a very meritorious part in exposing this man; and I do most earnestly wish and hope that some method will ere long be fallen upon to prevent all such unprincipled and mercenary wretches from going about unbridled in society to the great annoyance and disquietude of the public’ (Gifford, The Baviad and Mæviad, 1800, pp. 135–88). Williams emigrated to America shortly afterwards, and edited a New York democratic newspaper called ‘The Federalist.’ He died of typhus fever, and in indigent circumstances, at Brooklyn, on 23 Nov. 1818 (Gent. Mag. 1818, ii. 642). Under date 4 June 1821 Tom Moore the poet records: ‘Kenny said that Anthony Pasquin (who was a very dirty fellow) died of a cold caught by washing his face.’

There is a portrait of him, engraved by Wright from a painting by Sir Martin Archer Shee, and a small oval engraved in 1790 by E. Scott after M. Brown.