The International League of Antiquarian Booksellers (ILAB) has recently started a campaign amongst its international members to support the UNESCO World Book & Copyright Day on the 23rd April 2015.

"This is a day to celebrate books as the embodiment of human creativity and the desire to share ideas and knowledge, to inspire understanding and tolerance." says Ms Irina Bokova, Director-General of UNESCO.

The campaign is aimed at raising funds that will be donated to UNESCO. Organised by ILAB, antiquarian booksellers worldwide will organize Pop Up Book Fairs in their home cities and towns on the 23rd of April, often in unusual locations to reach a wider audience. In an official statement ILAB has communicated:

"Book collectors start as book readers! If we are concerned about the future of the book and younger generations of collectors, we must start at the very beginning. That’s why ILAB Pop Up Book Fairs on April 23, will be more than just a fair: they will be a venue for raising money to fight illiteracy! UNESCO is the most powerful worldwide partner we could have, and the UNESCO literacy projects deserve all our support. The money raised on the ILAB Pop Up Book Fairs will be used for a books’ donation in schools and libraries in South Sudan."

AntiquarianAuctions.com is an online auction platform, founded by antiquarian bookseller Paul Mills of Clarke’s Africana & Rare Books, who is a member of the British Antiquarian Bookseller’s Association (ABA) and therefore a member of the international trade association ILAB. AntiquarianAuctions.com is an international auction platform, dedicated to the sale of rare books, maps & prints, documents, letters, ephemera and vintage photography and operates from offices in Cape Town.

Paul Mills: "Even though we are an international business, our offices are based in Cape Town, South Africa and we felt that it is particularly important for us to support the campaign. South Africa alone has very high levels of illiteracy with varying statistics. We need to support education and training to fight illiteracy."

At the next auction which runs from 16 to 23 April, Clarke’s Rare Books & Africana will sell a facsimile copy of S. Daniell’s: African Scenery and Animals, donating the proceeds to UNESCO. 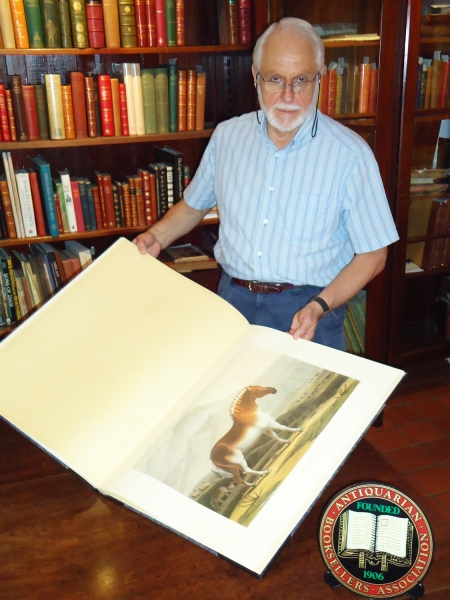 This is a facsimile reprint of the large folio of aquatint plates, first published in 1804-1805 with an introduction and notes by Frank Bradlow and signed by him.

Samuel Daniell arrived at the Cape on 9 December 1799. He was appointed by Lieutenant-General Dundas, who became his patron there, and to whom the first volume (part) is dedicated, to act as secretary to a mission to the 'Booshuanas'. The expedition eventually reached Lataku, at that time the limit of European exploration, and was the source for Daniell of the plates.'

Daniell’s African Scenery and Animals is described as 'the scarcest and most valuable of the large atlas folios of South African illustrations.' (Mendelssohn, South African Bibliography)

Please note that only this item will be donated to charity. The auction is not an entire charity auction.