WILLIAM BURCHELL and the Mapping of SOUTHERN AFRICA

In association with publishing house Penguin Random House, AntiquarianAuctions.com will host a talk with Susan Buchanan, author of the recently published "Burchell's Travels: The Life, Art and Journeys of William John Burchell", and other experts in the field. Local collectors and botanists, local historians and the general public will be invited and asked to make a donation to support the UNESCO literacy projects.

From 1811 – 1815 William John Burchell travelled extensively in southern Africa ‘for the purpose of acquiring knowledge’. He was a remarkable English naturalist who ‘knew a lot about a lot and could do a lot’ and he made significant contributions to literature, art, earth sciences and ethnography. [2] The Dictionary of National Biography is of the view that “His work as a Naturalist has never been equalled ... his objective, detailed annotation and brilliant appreciation of nature set science a goal seldom achieved’. However, Burchell has been neglected; as long ago as 1840, William Swainson, an English zoologist and his friend, lamented: ‘science must ever regret that one whose powers of mind were so varied ... was so signally neglected in his own country ’. [3]

Burchell’s map is #189 in Norwich; [4] see image for Lot # 159). Burchell’s map is rare: only 750 copies were printed for his book and many were disbound for the attractive aquatints. [5] The map is also scarce: the Antique Map Price Record has not identified copies sold in the past three decades, but it is likely that some sales may have been missed. His book, with the map, is much sought after by bibliophiles but it too is is also scarce. The map is seldom displayed, but did feature in the 2007 exhibition ‘To the Mountains of the Moon: Mapping African Exploration, 1541-1880’ held at Princeton University  (http://libweb5.princeton.edu/visual_materials/maps/websites/africa/burchell/burchell-map.html ).

Burchell set out to chart his travels accurately and this he did within the limits of the technology and information available to him. [1] He devoted 5 ½ pages in Volume 1 of his Travels in the Interior of Southern Africa to explain in some detail his cartographic methods;[i] his field drawings, now very faded, are at the Oxford Museum of Natural History. On his return to England, Burchell constructed a primary map on a scale of 9 inches to one degree of latitude. The map extends from Cape Town in the SW, to the Great Fish River in the SW, and 24S in the north. His approach resulted in an enormous map of approximately 7 ½ feet by 8 ½ feet (2.9m x 3.3m). Burchell supervised the reduction of his manuscript map and the engraving by Sydney Hall, ‘who is entitled to the greatest credit for accuracy and fidelity to the original’.  The large scale map was reduced to 70cm x 82.5cm for publication in Volume I of his book.

Burchell went to extraordinary lengths when it came to mapping areas of the country he did not visit: ‘the most troublesome part of my labour ... (that) exercised the whole of my patience’.  He examined numerous sources and eventually, ‘fitted and forced into shape, this heterogeneous collection of pieces’.  He concluded, however, that cartographic information on the country east of the Great Fish River was too unreliable for inclusion in his map; the mouth of the river was the most south-easterly terminus of his travels.

Notable features of Burchell’s map are the co-ordinates of many of his stations, the names of his hosts, translation of relevant Dutch and a few Hottentot words, explanations of signs and abbreviations, the date of establishment of numerous towns and some pertinent annotations, many of which include the date of his arrival at the stations.  The map was the first to record the location of the Asbestos Mountains near present day Prieska.  Burchell favoured the retention of place names used by the indigenous inhabitants.  Therefore, he preferred Gariep River to Orange River, as it was named by Colonel Robert Gordon in 1779; Burchell was the first to include the Gariep name on a map).

The Importance of Burchell’s Map

While Burchell and his map have been signally neglected, in the past few years there has been a resurgence of interest in the countries he visited [1, 2]; a book on his life, travels and art has been published, [6] and the only memorial to Burchell was unveiled in 2014 in the Garden route Botanical Gardens, in George (South Africa), near to the site of his outspan for about four months in 1814 where he explored the botany of the local forests (the first to do so).

In the first two decades of the 1800s, maps of the Cape of Good Hope by Aaron Arrowsmith I were influenced by Barrow.  From 1825, however, Aaron II and Samuel Arrowsmith plotted Burchell’s route from his map, which seems to have been an important source for their maps.  Burchell’s map also was a primary source for the 1828 map of South Africa by Sydney Hall (Burchell’s engraver) and certainly influenced the important 1834 map of John Arrowsmith (Cape of Good Hope) and the SDUK map (South Africa). 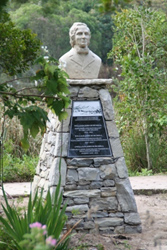