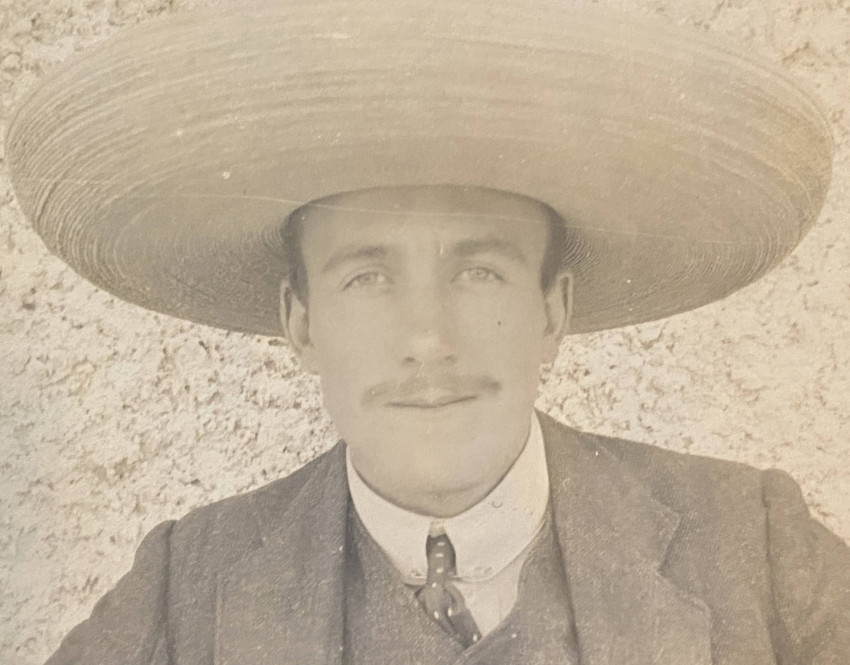 [SOUTH AMERICA, MEXICO and VENEZUELA] A ‘Kodak’ photograph album of 193 snapshot photographs, recalling Colin Burnley-Campbell’s travels and his work as a civil engineer - including working on a dam (in Mexico) and an asphalt works (in Venezuela), and subsequently in the Middle and Far East.

[Various locations, but all in the Americas: undated but 1912-1914]. Large oblong quarto (8 ¼ x 11 inches; 209 x 280 mm). 25 card leaves with window-mount spaces for 4 photos. per page, this album with 193 photographs (including several images of Burnley-Campbell). (Some fading and spotting [see images]).  Original half lather over cloth-covered boards (rubbed, lightly soiled, damage to spine). Provenance: purchased (indirectly) from the family.

A valuable record and also a reminder of a life cut short by WWI.

“Colin William Burnley-Campbell was born on the 9th March 1888 at Craigmore, Rothesay, Bute, Argllshire, the son of Hardin Burnley-Campbell, a retired Army Lieutenant Colonel, and Margaret Jane Campbell Hunter. Colin was educated at Marlborough College and Ardvreck School, Crieff, before he came to the University of Glasgow in 1906 at the age of 18 to study Engineering, taking classes in Natural Philosophy, Chemistry, Mathematics, Engineering and Drawing. He graduated BSc (Engineering) in 1912.

He was elected an Associate of the Institute of Civil Engineers in 1913 and worked on major civil engineering projects around the world, including a dam in Mexico, asphalt works in Venezuela, ... [for Sir John Jackson’s firm on waterworks at Beyrout, Syria, and Singapore harbour works, returning home in September, 1914] ... and accepted a commission in the 1st Bn. (Princess Louise’s) of the Argyll and Sutherland Highlanders.

2nd Lieutenant Colin William Burnley-Campbell was killed in action in France on the 27th June 1915, aged 27, by a bullet through the heart, while scouting alone in front of the trenches in Northern France. He is buried at La Chapelle-d'Armentieres Old Military Cemetery, west of Armentieres in Northern France.” (https://www.universitystory.gla.ac.uk/ww1-biography/?id=2234)