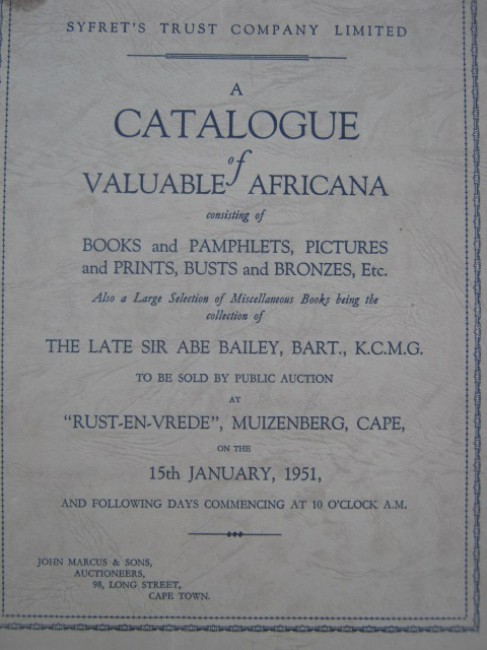 On his death at age 86 in 1940, mining magnate and first baronet Sir Abe Bailey willed many of his finest works of art to the National Gallery in Cape Town. His widow, Lady Mary Bailey (an Irish woman famous in her own right for making the first flight between London and Cape Town) remained in the family home, Rust-en-Vrede, for another ten years, when the contents were sold - Africana books and art by John Marcus in a three-day auction in January 1951 at Rust-en-Vrede; and furniture etc by another auctioneer.

This catalogue lists 1744 items (non-Africana books are not listed) over 122 pp, which include a frontispiece of the Rust-en-Vrede library and other monochrome plates illustrating 16 of the lots.

Making the catalogue more interesting for today's specialist collector, all the prices fetched were recorded in ink by Graham Botha, the well-known writer on Africana and South Africa's Chief Archivist, whose signature is on the title-page.

Other images show lots of some of the works of Pringle, Stanley and Thunberg.