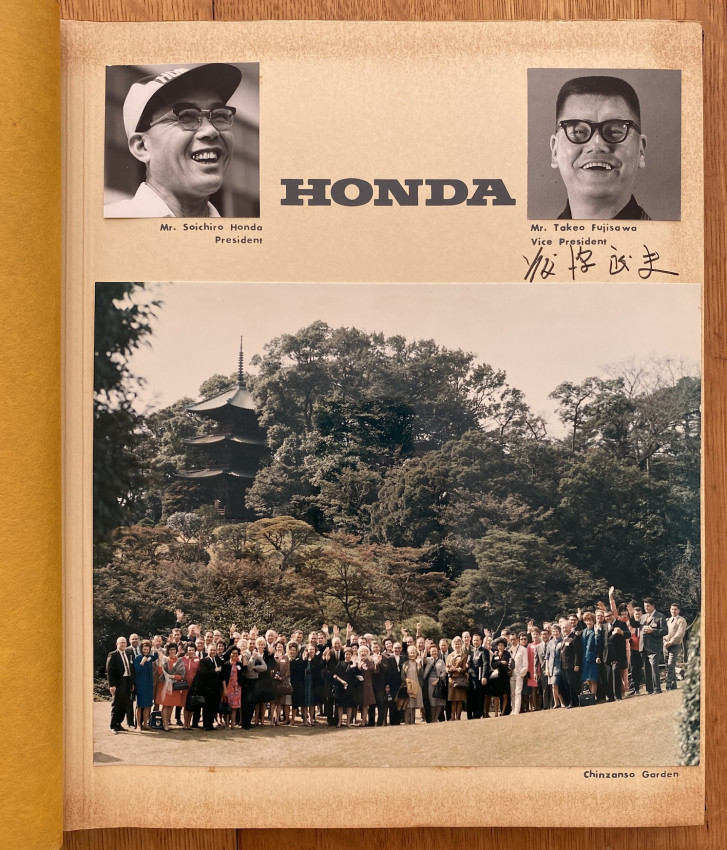 A personalized presentation album, titled “Holiday in Japan” given to one of a group of American Honda dealers who visited Japan in late October / early November 1967. [Japan: 1967?]. Square folio (12 ¾ x 11 ½ inches; 323 x 292 mm). ‘Title’ printed in gold on red paper, 2pp. text printed in grey on yellow paper. 24 card leaves, 62 original photographs (one in colour) mounted recto and verso of 18 leaves, 6 leaves left blank at the end, most pages with captioning, and there are also a number of manuscript additions: inscriptions by fellow American participants and some of the Japanese hosts, including Honda co-founder Takeo Fujisawa. (There is a space with glue residue suggesting that there is one 'missing' photo, otherwise excellent condition). Original Japanese brocade cover, gilt ties, gilt edges. Provenance: John T. Larabee (1936-2022, purchased from the estate).

John Larabee started a motorcycle dealership in 1964 in Manchester, Connecticut. “In 1974 he started selling Honda automobiles, and over 50 years, Manchester Honda has grown to become one of the largest Honda dealers in CT. … In addition to his love of motorcycles, he devoted much of his time to the automotive industry including his 22 year membership to the NADA Honda 20 Group and was past chairman of the professional dealer group. He served as the board chair of the Southern New England Honda dealers advertising Association for 10 years. He was a founding board member of the GHADA which ran the Hartford Auto Show and funded their charitable foundation. He was very proud and honored to meet the founding member of Honda Motor Company, Mr. Soichiro Honda, on one of several trips to Japan.” (https://www.legacy.com/us/obituaries/hartfordcourant/name/john-larabee-obituary?id=33860407).

Recipients of the Distinguished Conduct Medal 1855-1909