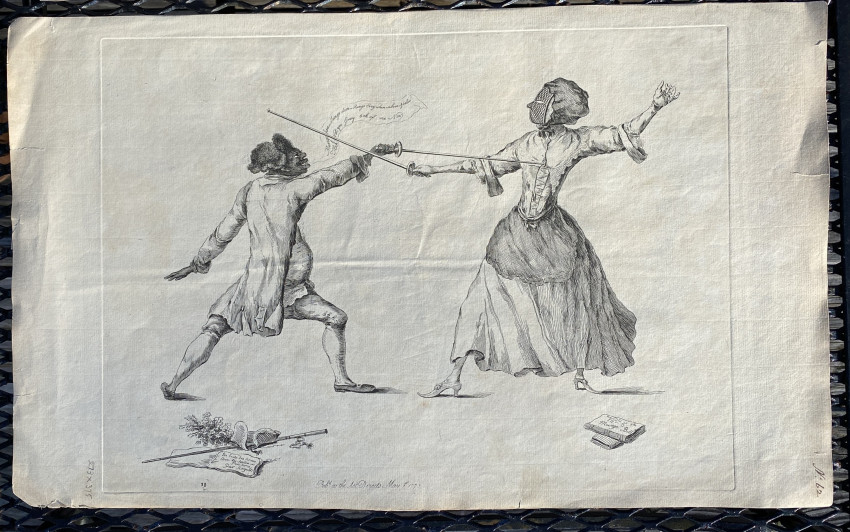 [William AUSTIN (1721-1820, artist)]. [The Duchess of Queensberry and Julius Soubise]. London: ‘Pub’d as the Act Directs May 1st 1773’. ‘Julius Soubise (1754 – 25 August 1798) was a freed Afro-Caribbean slave who became a well-known fop in late eighteenth-century Britain. …  His life of luxury as a free man of colour allowed him to excel in elite activities such as fencing and made him notorious in London's social scene as an exception to norms…  Soubise was born on the island of St. Kitts..  the son of an enslaved Jamaican woman… In 1764, he was given to Catherine Douglas, Duchess of Queensberry … who manumitted him.  … She gave Soubise a privileged life, treating him as if he were her own son … Soubise became socially prominent enough to become the subject of several caricatures… William Austin’s's well-known satirical print, The Duchess of Queensbury and Soubise (published 1 May 1773) shows the pair engaged in a fencing match. Austin's engraving was based on illustrations of fencing compiled by the Angelo fencing dynasty, combined with accounts of Soubise from Henry Angelo’s memoir. These accounts were satirized by Austin in a way which addresses Soubise and the duchess’ uncustomary relationship, depicting Soubise as Mungo [name of an officious slave from the 1769 comic opera The Padlock  by Isaac Bickerstaffe] …. In the print, text shows Soubise saying, “Mungo here, Mungo dere, Mungo every where; Above and below. Hah! Vat your gracy tink of me now?,” direct lines from the Mungo character.  BM Satire 5120

The Lucky Mistake or the Buck & Blood Flourishing Macaroni-playing a Solo on the Jelly Glasses. London: ‘Pub’d as the Act Directs May 1st 1773’. A fashionable hairdo causes mayhem. BM Satire 5121

3 plates, all on ‘J Whatman’ laid paper, probably from Austin’s series titled ‘Nature Display'd both Serious and Comic in 12 Designs…’

William Austin was a ‘drawing master, engraver, caricaturist; sold new and old prints, drawings and drawing materials, and framed and repaired pictures; apprenticed to George Bickham, then worked for Thomas Major; recorded in list of eminent painters in Universal Magazine in 1748; in early 1760s in business with Gerard Van der Gucht in Hanover Square; 1764-7 he was based at the former Brawn's Head Tavern in Bond Street. Seems then to have worked primarily as a drawing master. Later in his career ran other print shops, including the Patriotick Print Rooms in St James's Street, where in 1785 he was selling terracotta busts of Whig leaders as well as prints’ (https://www.britishmuseum.org/collection/term/BIOG17911)