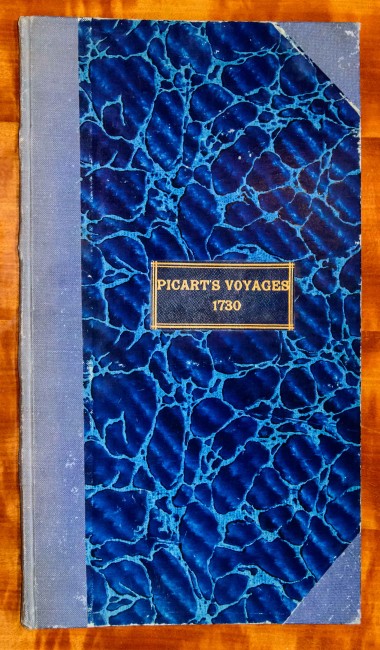 Picart (1673-1733) was perhaps the best-known French engraver of his time, inheriting his skills from his father and passing them on to his son, with all three generations being successful publishers as well.

Bernard Picart's most famous book was (translated) “Ceremonies and Religious Customs of all the People in the World”, which was published in French by the Picaart publishing firm in 10 volumes between 1723 and 1743.

The item in this lot is an English translation of Vol 4 (the Africans). It comprises the text plus one engraving and one decorated letter from the original, which had many engravings, and is paginated 431-514 and bound separately, with “Picart’s Voyages 1730” on a label on the upper board.

Picart never left Europe but relied on the accounts of other writers, whom Picart acknowledges in the footnotes. These included Kolbe, quotations from whose famous work (see Lot 2) were taken from the first German edition of 1719.

The countries surveyed include Nigeria, Guinea, Benin, Congo, Angola, South Caffraria, Monomatapa [in the area of Great Zimbabwe], Sofala, Ethiopia, Socotora, Madagascar, the Canaries. As well as religion, the coverage for some or all of these countries includes marriages, funerals, the priesthood, medicine, astrology, oaths, sorcery, superstitions, festivals, birthdays, rituals for the newborn, martial discipline, initiation, circumcision, dances and criminal trials.

Light sunning towards the page edges but a very good bright and unmarked copy, well bound in half blue cloth and blue marbled paper-boards.