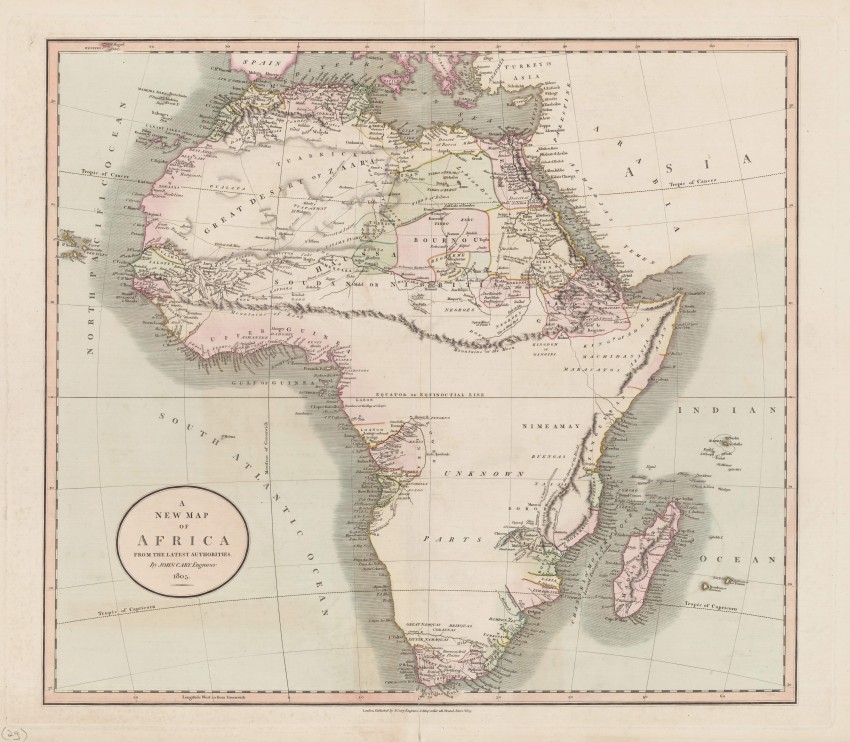 A new map of Africa

from the latest authorities by John Cary: engraver 1805.

This is astriking, large format map of Africa from 1805 by John Cary, a famous London map maker.   Indeed, this map is also famous for its depiction of the fabled Mountains of Kong, a non-existent mountain range charted on maps of Africa from 1798 (Mungo Park) through to the late 1880s, when the French explorer Louis Binger established that the mountains were fictitious in his 1887–89 expedition to chart the Niger River from its mouth

A number of trade routes are shown as are various Kingdoms as understood by Europeans at the time. The map shows a a very large unexplored region south of the Mountains of Kong and the Mountains of the Moon: labelled Unknown parts. There is good detail of South Africa and the Ivory and Slave Coast regions of West Africa. Lake Maravi (Malawi and formerly Nyasa) is prominent and had yet to be explored by Europeans; it is the only Great Rift Valley Lake to be shown on this map.

The map was published In: Cary's new universal atlas, containing distinct maps of all the principal states and kingdoms throughout the World. From the latest and best authorities extant. Fordham lists eds. of 1808, 1811 (reissue of 1808, no maps changes other than the 1811 date appearing on some of the maps), 1819 (one third of the maps amended), 1824 (maps unchanged from 1819 except for the date), 1828 (same as 1824, except for date changes, with reissues in 1833, 1836 (Baskes), and 1844). This is a fine atlas, one of the best of its period, and a source for American mapmakers (Tanner directly copied the World and continental maps for his New American Atlas). Fordham: (The maps) "are finely engraved, with full details, showing especially the water-ways and roads, and hill-shading, and are usually coloured.

John Cary (1754 - 1835) was a London cartographer of whom Tooley wrote:  "As an engraver he was elegant and exact with fine clear lettering and great delicacy of touch."

This map is a dark imprint on firm paper with wide margins. It has the original hand colouring. A beautiful map that epitomises the era of honest depiction of ignorance about the geography of large parts of Africa.