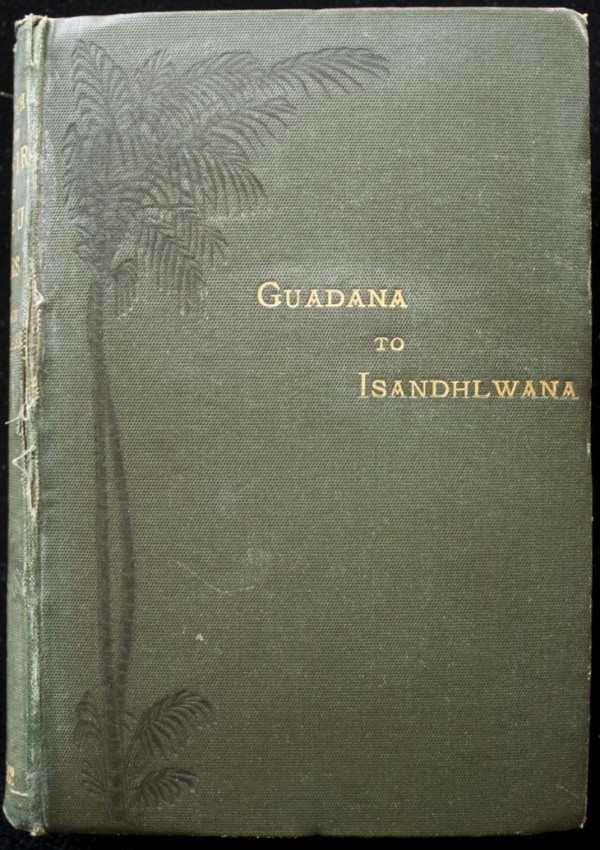 A Sketch of the Kafir and Zulu Wars. Guadana to Isandhlwana (copy inscribed by the author, Anglo-Zulu War, 1880)

vi + 284pp + 32pp(adverts at end), 4 battle plans(of which one is textual), and fold-out map at rear. The map has had some restoration on a few tears.

Inscribed by the author on the front end paper as follows: "Major Aylmer Somerset Rifle Brigade from Major Parr 1880".

Major-General Sir Henry Hallam Parr, K.C.B., C.M.G. [1847-1914] was commissioned as an ensign in the 13th Regiment of Foot on 8 September 1865. He was military secretary to Sir Battle Frere during the Anglo-Zulu War. Afterwards he fought in the First Boer War in 1881 and in the Anglo-Egyptian War in 1882. He also saw action at the Battle of Tamai in March 1884 and took part in the Nile Expedition later that year during the Mahdist War. For an image of Major Parr see the link: https://www.britishempire.co.uk/forces/armyunits/britishinfantry/13thltinfhenryparr.htm

Major Aylmer H.T.H. Somerset (1835-1882) of the Rifle Brigade saw action in the Anglo-Assante War in Ghana in 1873-1874 and the Anglo-Zulu War on 1879. He seems to have been a collector of weapons that were left on the battle field as his nephew William H.B. Somerset made a donation of Zulu spears to the Pitt Rivers Museum in 1935. For an image of Major Somerset see the link: https://www.npg.org.uk/collections/search/portraitLarge/mw243186/Aylmer-Howard-Tynte-Henry-Somerset

This work includes an account of the Zulu attack on Rorke's Drift.

'The author refers to the confusion existing amongst the various forces at the disposal of the authorities during the Kaffir War of 1877-8, and remarks, "The Magistrates seemed to have had nothing to do with the police, or the police with the Magistrates, nor had the officer commanding Her Majesty's troops on the frontier, direct communication with any civil authority. No one knew to whom to look for authority, assistance, or information, and matters were going from bad to worse, when luckily Sir Battle Frere arrived, ... and ... began to evolve some sort of order out of chaos." There are accounts of the Guadana, Quintana, and other engagements, together with particulars respecting the formation of a "Burgher Corps," but it is stated that there was much difficulty in getting the Boers to submit to any regulations or drill; although eventually they came into line. It is asserted that the war spirit gradually gained such irresistible influence over "many civilised Kaffirs ... who had been Christians since their boyhood," that some of them who held good appointments as clerks or interpreters under Government, left their situations, "exchanged clothes for a blanket," and joined their tribes in the bush. On May 29, 1878, "Sandili, the great chief of the fighting Gaikas ... was killed by a stray shot," and a month after an amnesty was published, "and war was virtually at an end." A portion of the volume is devoted to an account of the Zulu War, and in Chapter V. the author examines the causes which led to the hostilities, and gives a sketch of Cetywayo's policy and character, together with some particulars respecting the mobility of the Zulu army, and it is maintained that a Zulu Impi could cover forty or fifty miles a day.' - Mendelssohn Vol. II., page 141-142.

THE SILVERSMITHS AND GOLDSMITHS OF THE CAPE OF GOOD HOPE 1652-1850 ( De luxe edition signed by the&hellip;