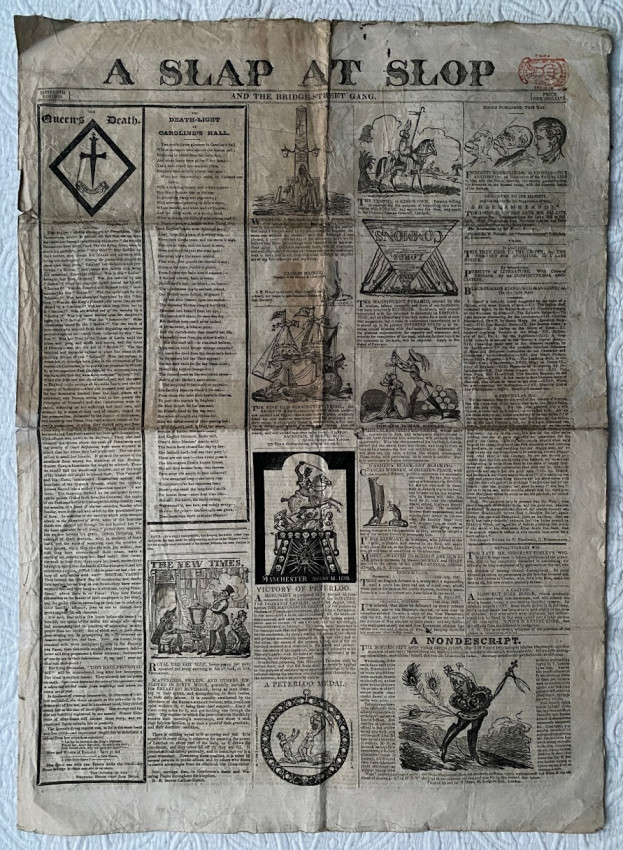 A Slap at Slop and the Bridge Street Gang ... Fifteenth Edition

a savage side-swipe at 'The New Times' and John Stoddard in particular and un-earned privilege in general.

A Slap at Slop and the Bridge Street Gang ... Fifteenth Edition. London: printed by and for William Hone, [August] 1821. Large folio (22 1/4 x 16in; 572 x 406mm), 4-page broadsheet parody of a newspaper, with a "tax stamp" in red, and 26 other wood-engraved illustrations after George Cruikshank. (Old folds, some small holes at folds, some surface soiling).

A later issue, revised to include two pieces on the death of Queen Caroline: a vitriolic anti-establishment diatribe, starting "Her Majesty died by the dagger of persecution" and "The Death-Light of Caroline's Hall'.

"The Lenny Bruce of the early nineteenth century, William Hone (1780-1842) was a radical comic writer and publisher who joined forces with the visual artist George Cruikshank (1792-1878) to expose and ridicule abuses in British politics as well as the news media supporting the conservative government...

One of the greatest but least celebrated publications issued by the two men was a serial news sheet titled A Slap at Slop, lampooning the work of John Stoddard" (https://graphicarts.princeton.edu/2019/01/19/a-slap-at-slop/).

Stoddard, publisher of The New Times newspaper was also a leader (along with the Duke of Wellington) of the "Bridge-Street Gang” - a pro-government propaganda group whose real name was the Constitutional Association for Opposing the Progress of Disloyal and Seditious Principles. Some of the humor is too 'time-specific' too be easily understood by the modern reader, but in general the aims of Hone and Cruikshank are clear, and they clearly skewer their targets more often than not!

Trekking the Great Thirst. Travel and Sport in the Kalahari Desert