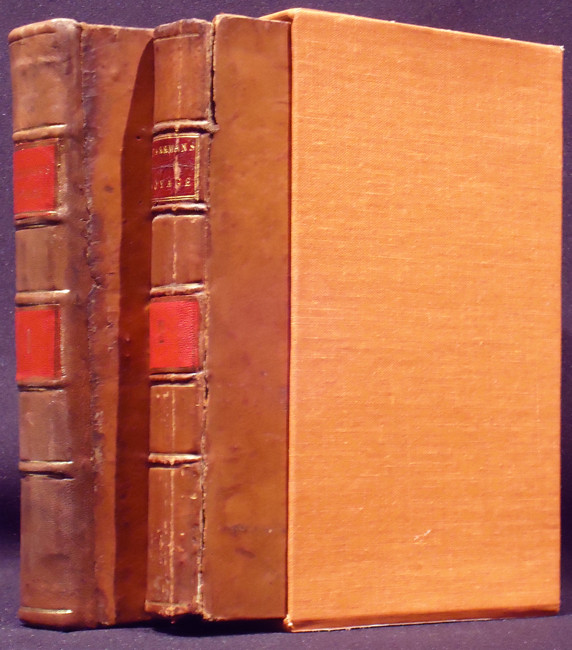 A VOYAGE TO THE CAPE OF GOOD HOPE, TOWARDS THE ANTARCTIC POLAR CIRCLE, AND ROUND THE WORLD:

But chiefly into the Country of the Hottentots and Caffres, from the year 1772 to 1776. By Andrew Sparrman, M.D., Professor of Physic at Stockholm, fellow of the Royal Academy of Sciences in Sweden, and Inspector of Its Cabinet of Natural History.

Translated from the original Swedish. With Plates. In two volumes.

The Dublin edition in 2 volumes: I. xxxvi, 395 pages, engraved frontispiece, folding map and 2 engraved folding plates bound at the end. II. xi, 382 pages, 7 engraved plates bound at the end. Contemporary full calf tight-back bound - volume I has been rebacked but volume II remains as originally bound with the front joint split but hold very firmly on the ties, and a crack in the tight-back spine, one original title label remains and three have been replaced, page edges dyed light blue, bookplate of Michael Pepper on each front paste-down endpaper - Pepper has also added his name in ink to both title pages, contents bright. The two volumes contained in a new brown cloth slipcase.

A manuscript note pasted onto the second free endpaper of volume I states, 'Charles Rivingston Hopson, M.D., formerly physician to the Finsbury Dispensary and the translator of Foster's, Sparrman's and Thunberg's Travels died the 23rd December (indecipherable but confirmed from the Dictionary of National Biography) 1796.' This note appears to bear out speculation about the identity of the translator in Professor Vernon Forbes' Foreword to the new edition published by the Van Riebeeck Society, Second Series, No. 17, Cape Town, 1986.

Professor Forbes, in an article in The Quarterly Bulletin of the South African Library, volume 1, Number 2, December 1946, pages 42-48, entitled, 'A Contribution to the Bibliography of Sparrman's Voyage to the Cape of Good Hope', writes, 'Dublin Edition, 1785. The 8vo edition which appeared in Dublin in 1785 is a word for word reprint on the first London edition with correction of the errata. It is not, however, identical to the second London edition as there are slight textual differences.'