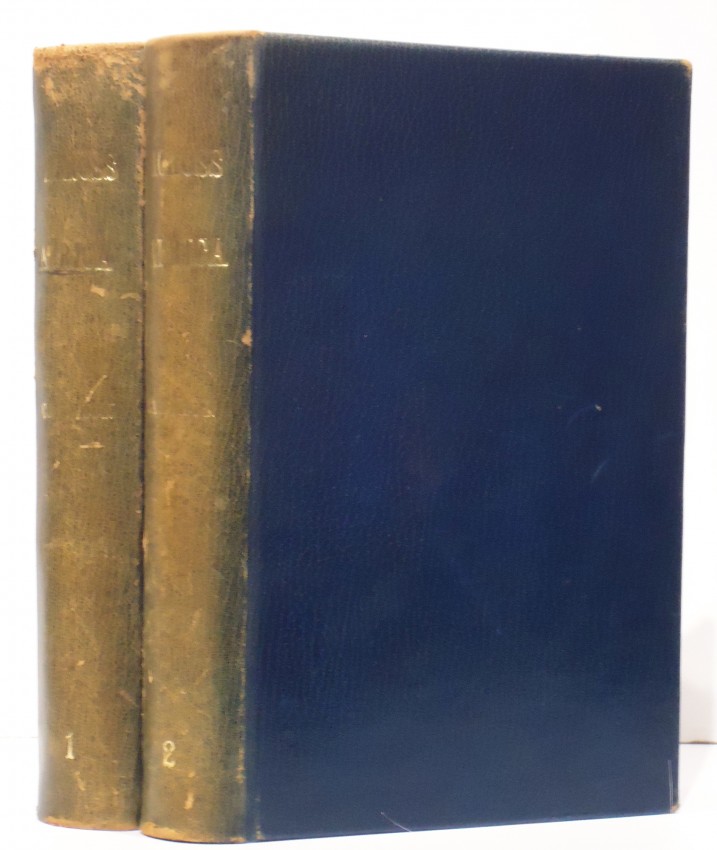 Fifth edition: 2 volumes, xvi, 389 + xii, 366 pages, frontispiece in each volume, 27 full page plates, 4 facsimiles of documents - 3 folding and numerous smaller woodcuts in the text, large folding map loosely inserted in volume 1, rebound in full blue leather with marbled endpapers, titled gilt on the spines which have faded to brown the spine of volume 1 is worn at the top, uncut edges with foxing, foxing on several pages of text, a good set.

Verney Lovett Cameron entered the British Navy in 1857, taking part in the Abyssinian campaign of 1868 and in the suppression of the east African slave trade. In 1872 the Royal Geographical Society chose him to lead an expedition to relieve to explorer David Livingstone, who was lost in eastern Africa, and also to explore on his own. Cameron arrived too late to be of help to Livingstone. Soon after leaving Zanzibar, the expedition met Livingstone's servants bearing his body. Cameron was, however, able to recover some of Livingstone's papers at Ujiji on Lake Tanganyika. While exploring the southern half of the lake, he established its outlet at the Lukuga River, a Congo tributary.

He then traced the Congo-Zambezi watershed for hundreds of miles and reached the west coast of Africa near Benguela, Angola, on Nov. 7, 1875. Thus becoming the first European to transverse the breadth of the African continent. Cameron's exploits did much to inform the outside world about Africa, whose dense jungles, vast deserts and non-navigable rivers had proven to be great barriers to travel and migration throughout history. He wrote Across Africa (1877) and for the rest of his life was associated with developing commercial projects in Africa. Claiming to have originated the idea of a "Cape to Cairo" railway, which Cecil Rhodes endeavoured to develop, Cameron also advocated an African-Asian railway from Tripoli, Libya, to Karachi [now in Pakistan]. He visited western Africa with Sir Richard Burton, with whom he wrote To the Gold Coast for Gold (1883). http://www.sahistory.org.za/dated-event/verney-cameron-first-european-cross-equatorial-africa