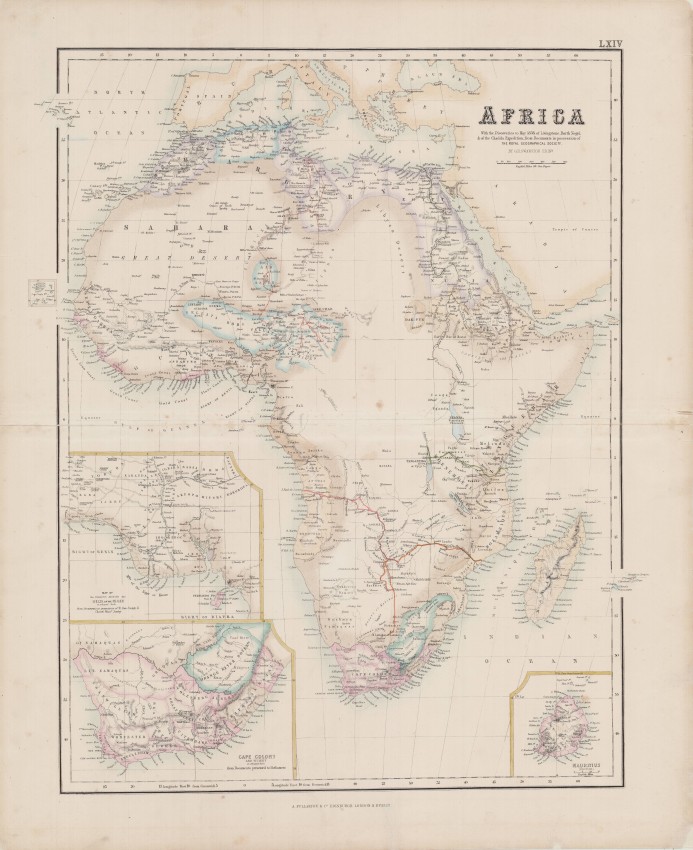 with discoveries of Livingstone, Barth, Vogel, & of the Chadda Expedition, from documents in possession of The Royal Geographical Society.

The long title captures the essence of this map. It is a cartographic snapshot of the conversion of terra incognita to known territory as a consequence of the mid-nineteenth century exploration of Africa. Knowledge of the potential of Africa led to its colonial partitioning as the century progressed.

This historically important map was published in 1860 by Fullarton, probably unbound; in 1872, Fullarton included a revised and updated edition of the map in the The Royal Illustrated Atlas, Of Modern Geography. The map includes inserts, perhaps the most important being of the southern, terminal part of the Niger River; this draws on the exploration and reports of Barth & Vogel of the Niger and the Chadda Rivers.

The map was published after Livingstone travelled from Luanda to the Zambesi (route shown on map); it also shows his tracks from the Kuruman area to the Zambesi, where  he later discovered and named the Victoria Falls (shown on the map) and then followed the Zambesi to its mouth. However, the map predates his discovery in 1859 of Lake Nyasa (Malawi) shown on the map as “Nyasa or the sea”, without a northern border.

The Cape Colony, with the short-lived Orange River Sovereignty, is included in an inset as is the mouth of the Niger River and Mauritius. There is also a tiny inset of the Cape Verde islands. Mauritius was captured on 3 December 1810 by the British and remained in its control until 1968; however, French institutions, including the Napoleonic Code of law, were maintained, and the French language was still more widely used than English.

This map has been considered sufficiently important to merit being geo-references by ArcGIS:

The map is #143 in Norwich; it is in very good condition.