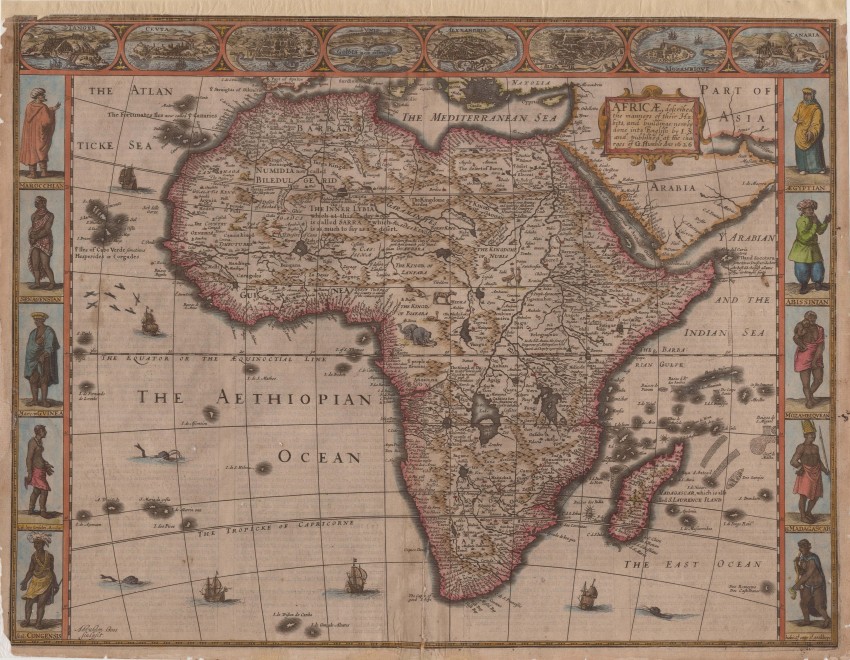 the manners of their habits and buildinge newly done into English by I.S. and published at the charges of G. Humble Ano 1626

John Speed was a notable cartographer and historian of Britain. This first state of his decorative 1626 map is sought after by collectors because it is the first map of Africa prepared by a notable English cartographer.

Speed's Theatre of the Empire of Great Britaine was widely influential, later editions of which included this map of Africa. However, the map first was published by George Humble in Speed's Prospect of the most famous parts of the world, which was a supplement to Speed’s Theatre.

Somewhat paradoxically, this first English map of Africa was engraved by the famous Abraham Goos, from Amsterdam – he was a relative of the Hondius family (which had been refugees in England) and therefore knew well the Dutch maps, from which he derived this map for Speed.  The map is based on maps by Jodocus Hondius (whose Latin annotations are translated into English) and Willem Blaeu (his geography). The geography is typically early seventeenth century with its legendary Ptolemaic mountains, rivers and lakes; typically, the Nile arises from two lakes. The Europeans knew little about the interior of Africa and, therefore, there are numerous illustrations of terrestrial animals (‘elephants for want of towns’, according to Jonathan Swift); the oceans have ships and sea serpents.

The map has a long publication history (see Betz #62): published first by George Humble (the scarce first state has the date of 1626); then Roger Rea, most of whose atlases were destroyed in the Great Fire of London (2nd state)). Basset & Chiswell acquired Speed’s plates after 1668 and published the 3rd and most commonly available state of the map, together with maps of the other continents and the world map. Some time before 1690 Christopher Browne acquired the plates, but a map of Africa from him is not known.

The English text on verso provides a fascinating view of the European concept concerning the wildlife, customs and manners of the African people. There is a description of Anthropophagi, cannibals, who kill their own babies to avoid the trouble of raising them; but, in order to preserve their race, steal children from their neighbors.

The side borders of this carte-a-figure map comprise sets of 5 decorative costumes of African peoples. Some of the side border illustrations are copied from Willem Blaeu. At top is a panel of panoramas and plans illustrating Tanger, Ceuta, Alger, Tunis, Alexandria, Cairo (Alca), Mozambique and the Canaries.

This uncommon edition (first state) of the map has been rescued after it had been stuck on to non-archival board (see last image) from which it has been released and the free map de-acidified. The ragged side margins have been strengthened, defects filled with Japanese tissue paper and the upper margin extended to enable framing and the bottom of the central join strengthened. The map itself and the panels are in very good condition and the colours are attractive. Archival lens tissue paper has been applied reversibly to the verso to strengthen the paper, while also allowing the text to be read.

This is an historically important, uncommon and very attractive map with a history of survival and 'revival'.

General Chart of the Colony of the Cape of Good Hope

Africa South of the Equator