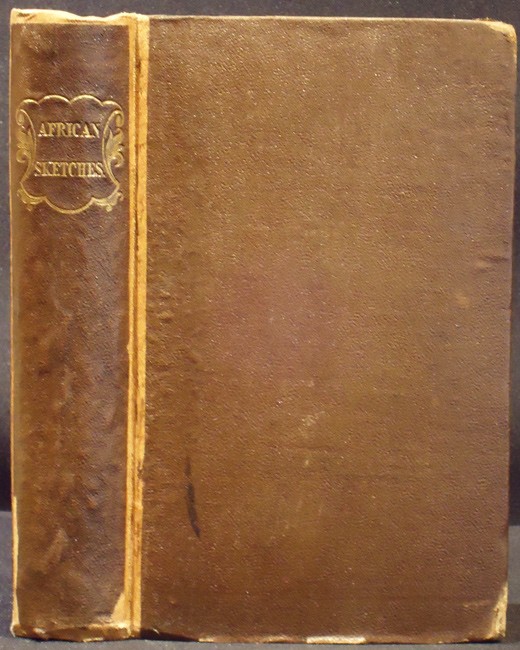 Part I, Poems Illustrative of South Africa (including 'The Bechuana Boy')

Part II, Narrative of a Residence in South Africa.


2 parts in 1, 528 pages, engraved frontispiece in part 1, 'The Bechuana Boy' engraved by C. Landseer, engraved title page vignette, engraved map of the frontier district in part 2, original brown cloth rebacked preserving the original back strip, titled in gilt on the spine within floral border, bookplate on the front paste-down endpaper and a corresponding small stamp below the date on the title page. The frontispiece and title page are foxed but otherwise the contents are good.

Mendelssohn (Sydney) South African Bibliography, volume 2, page 187. 'This volume reproduces the South African poems published in "Ephemerides," and others which appeared in various periodicals to which the author was an occasional contributor. The "Narrative of a Residence in Africa" is published for the first time, having been delayed owing to Mr Pringle's duties as "Secretary to the Society for the Abolition of Slavery throughout the British Dominions."'

'...but the piece, perhaps, which more than any other marks this pious Scottish farmer's son for a real literary artist, the brother at once of Burns and Scott and Livingstone, is The Bechuana Boy. This touching and beautiful piece, part fact, part fiction, truth arranged with art, was based on the story of a Bechuana orphan boy, who had been carried off from his native country by the mountain tribes, half-bred Hottentots, and who fell under Pringle's protection. The touch of the pet springbok was suggested to Pringle by his seeing, a few days afterwards, a slave child playing with a fawn at a farmer's residence. The real little African boy brought by Pringle and his wife to England became their devoted protégé and almost adopted child, but died, like many at that time, of an affection of the lungs.'