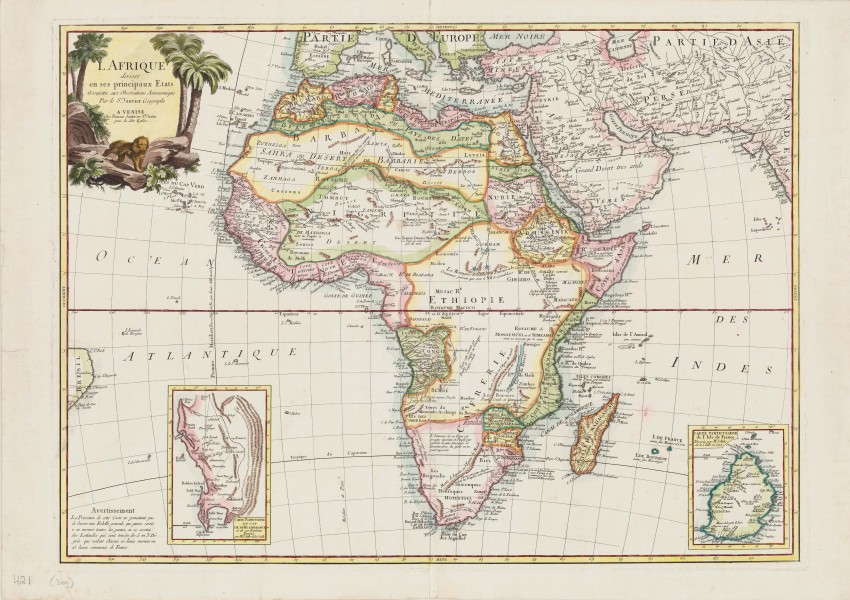 This map was produced in 1776 by Francois Santini in Venice, probably engraved by his brother Pablo, for his Atlas Universel. The map was published again in 1784 by Giuseppe Remondini, a respected Venetian cartographer and publisher. The latter map is quite commonly available but the map with the Santini imprint is uncommonly on the market.

Santini was a publisher rather than a map maker and he commissioned for his own atlas the development of a number of maps based on those produced by French cartographers. Santini's map of Africa is based on a map published in 1762 by Le Seur (Jean or Robert) Janvier,  a leading French geographer and publisher.

The map is based on Ptolemy’s geography of the interior, augmented by information obtained from the early colonial settlements. Janvier commented, and Santini copied, that the interior near today's northern Botswana was inhabited by ‘savages with whom one could not negotiate’.

The map shows the bulge of Brazil to remind us of the route taken by sailing ships, which took them close to the coast of Brazil in order to secure the most favourable trade winds

The map is particularly interesting for reasons that have little to do with the Africa continent per se: royal decree of a prime meridian; and astronomy applied to surveying and accurate mapping.

The map informs the reader that the prime meridian was not Paris, but Ferro Island in the Canaries, as dictated by King Louis XIII (who decreed the island to be 20 degrees west of Paris, but the island did not oblige - it is 18° 9' 39" west of the Greenwich and to which must be added an additional 2° 20' 56.45 west of Paris).  Janvier and then Santini politely indicate that 20° East of Ferro is the Paris meridian.

The two insets are of even greater importance in the history of cartography.

The inset of the Cape of Good Hope is a copy of the small map by the astronomer Nicolas-Louis de la Caille, who was the first really accurately to determine the longitude of the Cape and also accurately to chart the southern skies. His 1755 map illustrated an article to the French Academy of Science on his determination of the shape of Earth conducted at the Cape in 1752. The Lacaille maps shows the triangles Lacaille used to determine the length of the meridian through his observatory in Strand St., Cape Town; this demanding geodetic survey was the beginning of quantitative science in Southern Africa.

The other inset is of Mauritius: Lacaille applied astronomical and triangulation survey methods to map the island, thus constructing the first accurate map of the island. He was also the first to use this cartographic methodology in the southern hemisphere ... arguably, the beginning of scientific cartography in the hemisphere.

Paolo Santini, an Abbot who specialized in sacred images as well as cartography. His map was engraved on copper and printed on a single page that was folded in the middle.  He also worked for the Remondini's who republished his map.