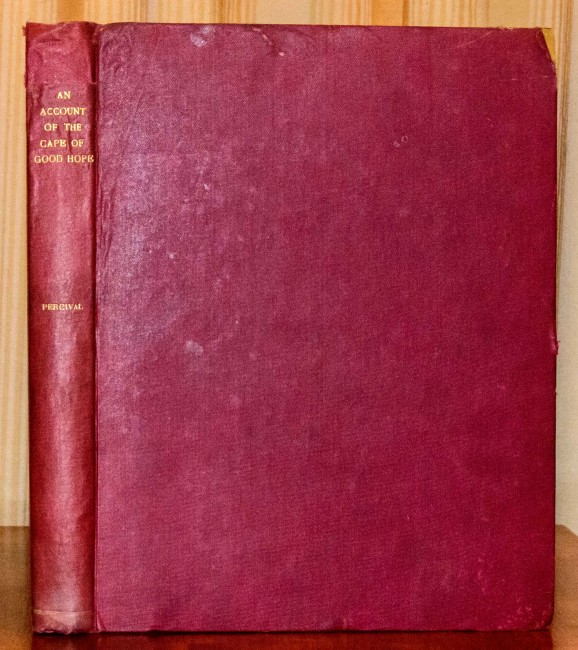 " . . . Containing an Historical View of its original Settlement by the Dutch, its Capture by the British in 1795, and the different Policy pursued there by the Dutch and British Governments. Also a Sketch of its Geography, Productions, the Manners and Customs of its Inhabitants &c, &c. With a view of the political and commercial advantages which might be derived from its possession by Great Britain"

xii + 339 pp + 4 pp of publisher’s announcements. Some leaves uncut, one instance being pp 245/248, with the significance of p 247 being that the running head is set as "THE CAPE OF GOODHOPE", indicating that this is a copy of the first, uncorrected, impression. No index or illustrations. Full bound in maroon cloth-boards, with gilt lettering to the spine and new plain endpapers. Ink signature on title-page. A very good, unread copy, with occasional light spotting and creasing.

Captain Percival was attached to the 18th or Royal Irish Regiment and the author of an account of the Island of Ceylon. In his dedication in this volume he asks for the Duke of York's patronage and protection because of “the approbation which a generous Public has bestowed upon [his earlier volume]". Percival was one of the few serving officers (Churchill was obviously another) to have found the time and the skill to write so authoritatively about the Cape and, previously, Ceylon. His range is indicated by his chapter summaries, including: first visit and taking of the Dutch fleet at Saldanha Bay; metallic ores, coal mine, minerals; opinion concerning the unicorn; Constantia wine; fuel and house rent dear at the Cape; and expenditure far greater than revenue.