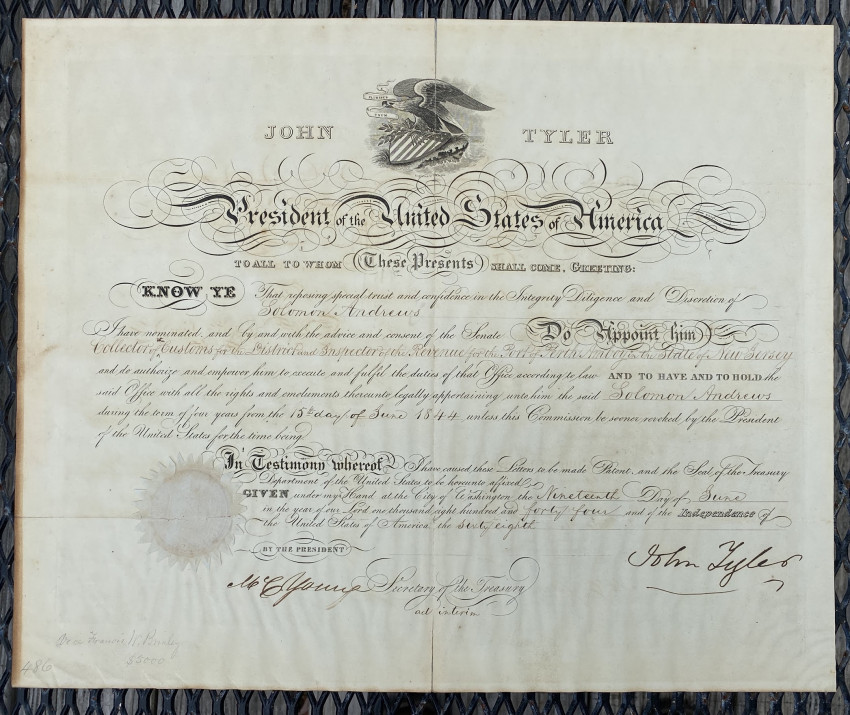 An engraved and manuscript document, signed and dated by President Tyler and interim Secretary of the Treasury Mclintock Young,

An engraved and manuscript document, signed and dated by President Tyler and interim Secretary of the Treasury Mclintock Young, dated Washington 19th June 1844, being ‘letters patent’ appointing Solomon Andrews to be ‘Collector of the Customs for the District and Inspector of the Revenue for the Port of Perth Amboy in the State of New Jersey … during the term of four years from the 15th day of June 1844 unless this Commission be sooner revoked by the President…’, on wove paper (13 ¾ x 16 ¾in;  348 x 425mm), watermarked ‘J.[ohn] Robeson / Phila[Delphia]’, with attached seal of the Treasury Department.

Solomon Andrews: an example of what/who made America great.

Solomon Andrews (February 15, 1806 – October 17, 1872) was a doctor, aviator and dirigible airship inventor. Andrews invented an airship called Aereon which received some notice in the 1860s. He claimed to sail it as one would a sailboat. Mention is made of the movement of pilot and passenger fore and aft in the basket to control attitude. He was a medical doctor and three times Mayor of Perth Amboy, New Jersey. He served as the health officer of Perth Amboy, New Jersey and supervised the construction of the city's first sewer system. He served as the Collector of the Port of New Jersey in Perth Amboy from 1844 to 1845.

He was born on February 15, 1806, in Herkimer, New York to Josiah Bishop Andrews and Mary Bissell. He received his medical degree from Rutgers Medical School in 1827.

His first "Aereon" flew over Perth Amboy on June 1, 1863. This had three 80-foot cigar-shaped balloons, with a rudder and gondola. Buoyancy was controlled by jettisoning sand ballast or releasing hydrogen lift gas.    Dr. Andrews wrote Abraham Lincoln later that summer offering the Aereon for use in the American Civil War, during which he served for a time as a volunteer surgeon in the Union Army.  After much discussion, he arranged a demonstration early in 1864 before the Smithsonian Institution. He was informed, nearly a year later, that the Government had little interest in his invention, and by that time the war was nearly over.

Andrews then organized the Aerial Navigation Company to build commercial Airships and establish a regular line between New York and Philadelphia.

The "Aereon #2" had one "lemon-shaped" balloon, sharply pointed at the ends. It controlled buoyancy with a system of lines and pulleys that compressed the gas or allowed it to expand. This flew over New York City on May 25, 1866 and June 5, 1866. The second trip, carrying a passenger-assistant (a news reporter had to be left out at the last minute because of weight problems) ended at Oyster Bay, Long Island. At this point, the post-war economic collapse and its bank failures destroyed the company, and he never flew again.

The difference of specific gravity between the balloon and the surrounding atmosphere could be converted by a system of inclined planes to steer the craft without a motor. He referred to his propulsion as "gravitation." The craft was not normally trimmed to be neutrally buoyant. Instead it would be cycled between positive and negative buoyancy. The resulting airflow across the body of the craft and attached airfoils would propel it.