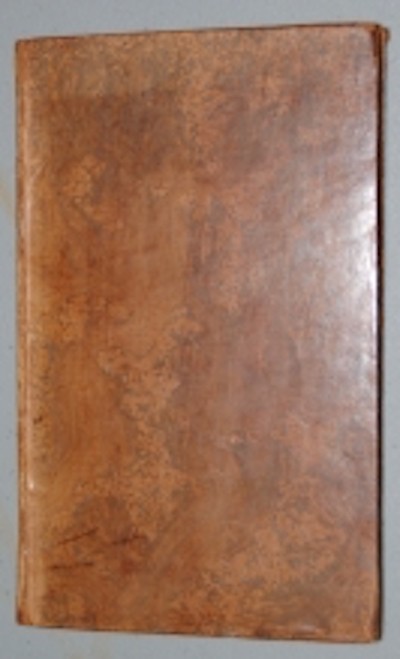 An Essay on the Slavery and Commerce of the Human Species, particularly the African.

Small folio (21 cm) in original polished calf, gilt titles and decoration; translated and enlarged from a Latin dissertation, which was honoured with the First Prize in the University of Cambridge, for the year 1785.

"This monumental and touching work by the Father of the movement for the emancipation of Slaves has not in the least diminished in its great value in spite of its voice crying [230] years ago. It remains a gem for all times. The Cape of Good Hope has not escaped the strictures voiced therein" (catalogue item, Africana Antiquarians, Port Elizabeth, 1952, included).

At rear is advertisement of anti-slavery publications by Phillips, including Clarkson's second book 'in the press'. With the bookplate of Rev. John Holmes (1774-1831) of Gawdy Hall, Norfolk. According to DNB and Wikipedia, it was at Cambridge in 1785 that Clarkson entered a Latin essay competition that was to set him on the course for the remainder of his life. The topic of the essay, set by university vice-chancellor Peter Peckard, was "Is it lawful to enslave the unconsenting?", and it led Clarkson to consider the question of the slave trade. He read everything he could on the subject, including the works of Anthony Benezet, a Quaker abolitionist, as well as first hand accounts of the African slave trade such as Francis Moore's Travels into the Interior Parts of Africa. After winning the prize, Clarkson had what he called a spiritual revelation as he travelled by horseback between Cambridge and London. He broke up his journey at Wadesmill, Hertfordshire.

He wrote: "As it is usual to read these essays publicly in the senate-house soon after the prize is adjudged, I was called to Cambridge for this purpose. I went and performed my office. On returning however to London, the subject of it almost wholly engrossed my thoughts. I became at times very seriously affected while upon the road. I stopped my horse occasionally, and dismounted and walked. I frequently tried to persuade myself in these intervals that the contents of my essay could not be true. The more, however, I reflected upon them, or rather upon the authorities on which they were founded, the more I gave them credit. Coming in sight of Wades Mill, in Hertfordshire, I sat down disconsolate on the turf by the roadside and held my horse. Here a thought came into my mind, that if the contents of the essay were true, it was time some person should see these calamities to their end. Agitated in this manner, I reached home. This was in the summer of 1785." This experience and sense of calling ultimately led him to devote his life to abolishing the slave trade. Minor tip wear, a bit rubbed, a loose ffep; near Fine copy. Scarce.

THE RIGHTS OF DESIRE (Signed)