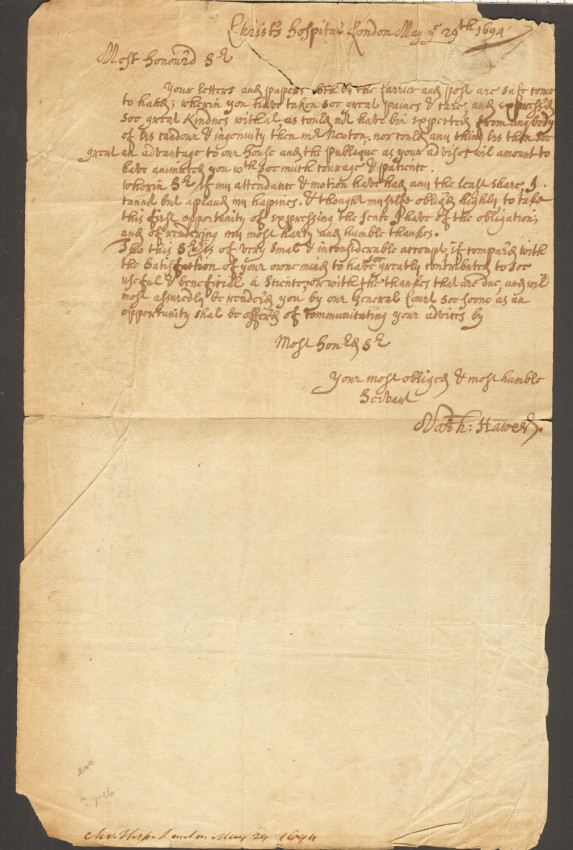 In 1694 Newton drew up “A New Scheme of learning for the Mathematical Boys at Christ’s Hospital”. Newton communicated his suggestions in a letter dated 25 May 1694, and in this letter Hawes writes to thank him.

" Your letters and paper, both by the Carrier and post are safe come to hand, wherin you have taken soe great paines & care, and expressed soe great kindnes withal, as could not have bin expected from anybody of les candour & ingenuity than Mr. Newton, nor could anything, les than soe great an advantage to our house and the publique as your advisor wil amount to have animated you wth. soe much courage & patience. . . .

" Tho this lr. is of very smal & inconsiderable accompt, if compared with the satisfaction of your owne mind to have soe greatly contributed to soe useful & beneficial a science, or with the thanks that are due, and wil most assuredly be render'd you by our General Court soe soone as an opportunity shal be offer'd."

‘The Royal Mathematical School at Christ’s Hospital was established when Sir Robert Clayton, an Alderman and later Lord Mayor in the City of London, had been reading a book about the work of the king of France, Louis XIV, and his Government. The French king had keenly supported the foundation of the Royal Academy of Sciences in Paris in 1666, one of the goals of which was to improve the art of navigation and to make France a great maritime power…

Sir Robert Clayton then had the idea of introducing a similar education for some of the boys at Christ’s Hospital, having learned much about Christ’s Hospital from his business associate John Morris who was a Governor of the school. … Meanwhile, in 1646 Richard Aldworth had left £7000 in his will to Christ’s Hospital for the education and maintenance of forty boys, but the government held the legacy and the school had had no success in persuading the Treasury to release the funds. In June 1673, however, Sir Robert heard about the problem from the school’s Clerk, William Parrey, and visiting the Treasury on his own business he used the opportunity to put forward the idea that King Charles II might like to support Christ’s Hospital by releasing the Aldworth legacy specifically to fund teaching boys the mathematics needed for navigation. The King agreed without hesitation and the Royal Mathematical School was founded in August. Sir Robert was rewarded by being elected as a Governor of Christ’s Hospital alongside John Morris.

Matters moved swiftly and by November of 1673 a master had been appointed and about forty 14 year old Christ’s Hospital boys were chosen as the first pupils to take up places in the new Royal Mathematical School. Robert Hooke designed a silver plated badge for the pupils to wear on the left shoulder of the uniform bluecoat. The badge is still worn today by Christ’s Hospital pupils who have a parent with a background of service in the Royal Navy, Royal Marines or Royal Navy Reserve.

Two years after the foundation of the Royal Mathematical School, the first boys left to begin seven year apprenticeships with ships’ masters, with much support from Samuel Pepys who persuaded the government to contribute £370-10-0 a year to pay the masters for the extra work. Samuel Pepys in the Admiralty continued to be closely associated with the Royal Mathematical School throughout the rest of the century, alongside key figures such as Sir Christopher Wren, Sir Jonas Moore at the Tower of London, and John Flamsteed, astronomer at the newly built Royal Greenwich Observatory, who gave lessons in astronomy to some of the boys. Even Isaac Newton became involved, when in 1694 he suggested a revised syllabus which was used for a short time. …’ (https://www.christs-hospital.org.uk/about-christs-hospital/the-royal-mathematical-school/ )