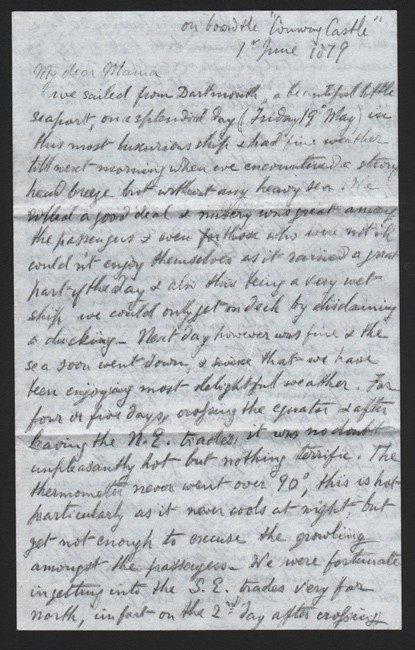 A group of 13 letters and 2 continuations to his mother written between 20th May and 4th August 1879 whilst on active service in Zululand by Captain the Hon. Fitzwilliam Elliot, 93rd Sutherland Highlanders (93rd Foot), son of the 3rd Earl of Minto and younger brother of the 4th Earl of Minto, Governor General of Canada and Viceroy of India. Most with the envelopes addressed to his mother the Countess of Minto at 48 Eaton Square, London or Minto House, Hawick, N.B., with the 6d rubber stamp – ‘On active service in the field, no stamps procurable.’ The letters are closely written on 74 pages of folded blue note paper each 200 x 125 mm. Elliot, as an experienced officer and from a privileged social position, provides valuable insight into the campaign and the organisation of the army.

Four carte de visite photographs, two of Elliot himself which are inscribed in his hand on the back, ‘Self on joining 93rd in  1867', and one each of his mother and father the Earl and Countess of Minto.

Elliot’s commission appointing him Captain on 19th October 1878.
Elliot left England aboard the Conway Castle on 20th May 1879 and arrived in Cape Town on Friday, 6th June. He stayed at Government House where he was privy to some of the gossip in high places surrounding the war and the recent death of the Prince Imperial. He comments about Lord Chelmsford, ‘He has excellent officers in his army but cannot apparently get them to pull well together owing in a great degree to the unpopularity of Col. Crealock his military secretary….Now I am not with the army yet and am quite at liberty to tell you everything I hear of my future Commander in Chief and in saying that I believe Frere has little confidence in him, there is the impression the staff here has given me and of course in giving it to me they know, probably wish, that I won’t keep it to myself. No one seems to expect the war to end this year.’

He departed on 9th June aboard The Melrose arriving in Durban on Saturday 14th June where he received orders to joint Lieutenant-Colonel Crealock’s column on the Tugela River. He comments about the Prince Imperial’s death, ‘I think as usual people are hasty in their strong condemnation of (Captain) Carey. I don’t know him, but I do many of his friends and they all say he a good fellow but not a brilliant one. He is to be tried and I am afraid will be found guilty in which case there is no choice of punishment. It is a very nasty business.’

By 30th June he was at Camp Durnford where his detachment was involved with raiding the Zulu kraals and where they anticipated an advance to Ulundi and the arrival of Sir Garnet Wolseley by ship. However Wolseley was unable to land owing to rough seas and was forced to return to Durban. Elliot describes meeting John Dunn. There is evident frustration with Crealock’s slow progress, ‘His staff did all they could to make him move, but no, he would do nothing…he has had a grand chance and lost it and I should doubt his ever receiving another good command. If he does I hope I shan’t be serving under him.’

In a letter dated Camp Durnford, 10th July, he describes the cavalry and ‘Dunn’s men’ moving in support of the advance towards Ulundi and meeting the first Zulu warriors who had been present at the battle of Ulundi on 5th July and the news that Cetshwayo had escaped with one regiment to the north.

On 13th July he writes of receiving the first dispatches from Lord Chelmsford’s column about the victory at Ulundi. Happiness at this success is tinged with disappointment and discontent with Crealock for not having pressed on more vigorously. ‘Yesterday I was speaking to Sir Garnet who asked me if I have been lucky enough to see anything and I answered that I had been so far fortunate in having seen everything that was to have been seen with the column since its advance, but that was almost nothing…..on which Sir Garnet replied that, “ I should have thought not of what the column should or could have done, but rather by what sort of man it was commanded.” These are strong words for the C. in C. to use to me….’

He continues describing his own personal experiences, ‘I have therefore been very lucky in being attached to the cavalry and seeing more action than anyone not belonging to it. They have been doing all the dirty work for months past. In such a war there is nothing to be gained except by very fear and no glory in defeating such savages against whom there is no feeling of enmity but rather the opposite. I have taken rather a fancy to the Zulus, they are always so thoroughly manly, they never look cowed, but hold themselves always like men, never appearing angry, nor even humiliated at the loss of homes, cattle, women, everything indeed which they possess.’

On 19th July he writes describing a parade at which Wolseley presented Chard with his V.C. for his role at Rorke’s Drift commenting, ‘He (Chard) is a rum’un to look at, and most unprepossessing. It is generally considered that the V.C. is a most unsuitable reward and it would have been better to have given something else. Chard was the senior officer at Rorke’s Drift and got the chief kudos, whereas Bromhead was in point of fact in charge of the fighting element. The man to whom the chief credit for the defence of the post in given is a commissariat officer, but as he is a non-combatant it is probably his doings which will never be known beyond the troops here. Pearson has returned to England where probably he will be made much of, greatly to the amusement of all here. He is quite universally considered to be one of the greatest muffs this war has produced.’

In a letter dated 5th August Elliot gives a very detailed account of the composition of the 1st Division (Crealock’s column) naming all the senior officers and comments on them. He describes the equipment carried by the men and their rations, and also the transport wagons and what they carried.

William Fitzwilliam Elliot-Murray-Kynynmound, retired from the army as a Lieutenant-Colonel. His service records show that prior to Zululand he had served in Nova Scotia in Canada. In his final letters he makes mention of wishing to be posted back to Canada where there was evidently a romantic interest for on 4th February 1880 in Halifax he married Elizabeth Fanny Rutherford. They had three children. His son ‘Jock’ served in the Anglo-Boer War 1899-1902. After the Zulu campaign Elliot served as Deputy Assistant Adjutant General Dublin District 1881-1884, in the War Office from 1884-89 and North East District 1889-92. He published two books, The Border Elliots and the Family of Minto (1897) and
The Battle of Flodden and the Raids of 1513 (1911).