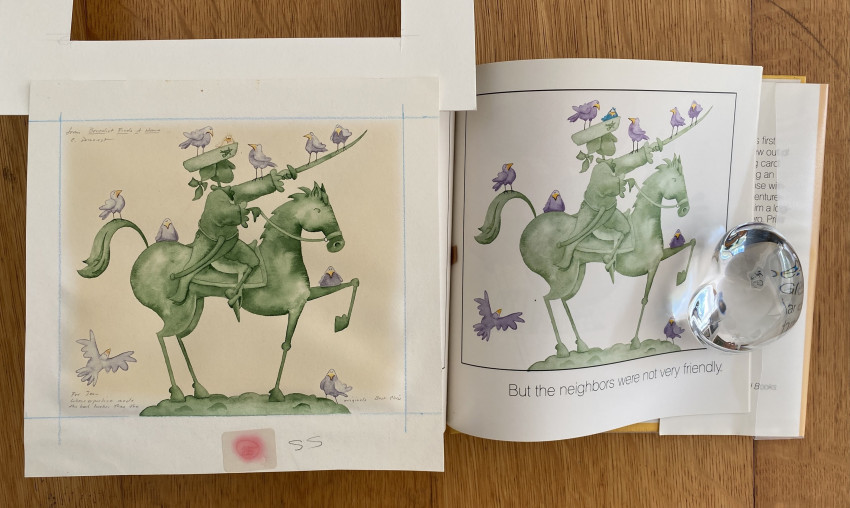 Benedict Finds a Home [with:] an original watercolor, artwork to the published work

The watercolor illsutrates 'But the neighbors were not very friendly' and is inscribed to the book's designer.

Chris L. DEMAREST (b. 1951). [‘But the neighbors were not very friendly’], an original watercolor drawing, being the artwork to p.[21] of ‘Benedict Finds a Home’. [USA: 1982]. Water color on wove paper (sheet size: 7 ¾ x 7 ¾ in; 197 x 197mm), marked up for reproduction. Provenance: Jean H. Krulis (1937-2020, gift of the artist with presentation inscription: ‘from Benedict Finds A Home / C. Demarest / For Jean / Whose expertise / made the book livelier than the originals. Best Chris’, bought from the estate). Condition: Benedict, who should be blue, is white/cream – this may be because blue is often a ‘fugitive’ color and in this case has been washed out by sunlight?

A charming image with a fulsome dedication from prolific illustrator Chris Demarest: ‘Benedict’ started life as a greeting-card character, but served to launch Demarest’s career as a book illustrator when he sent his creation off on a quest to find a place of his own: some peace and quiet.

Hartford, Ct, born artist Christopher Lynn Demaret graduated from the University of Massachusetts in 1976 with a B.F.A. The present work was the first that he both wrote and illustrated.

Jean H. Krulis graduated from The Cooper Union’s School of Art. She worked in New York City, as a designer of children’s books. (2)

LANDMARKS OF THE CAPE (6 signed Lithographs)

THE GAME OF BRITISH EAST AFRICA