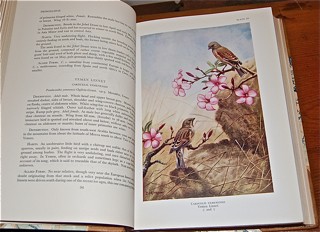 The first account of the birds of the Peninsula, together with those of the Sinai, Iraq, Syria, Jordan, Palestine. Meinertzhagen was long associated with Britain’s political and military affairs in the Middle East from early in the twentieth century, and his ornithology is a highly personal one - notably his account of the Lammergeier. With the bookplate and from the collection of the noted African ornithologist Peter Steyn (Eagle Days, Hunters of the African Sky) who has left several neat penciled ms. notes - one (p. 544) on sighting a skua at Dubai and the other (p. 575) recording a conversation on the Syrian ostrich, by then apparently gone, with a prominent member of the ruling family of Abu Dhabi. (At this place Steyn suggests, not altogether persuasively, that Meinertzhagen should have described an ostrich’s rapid propulsion as ‘fleeing’ rather than as ‘in flight’.)

A fine and impressively handsome volume in bespoke binding with an interesting association. Good on the birds, too.

GAMEBIRDS OF SOUTHERN AFRICA (Collector's Edition signed by the author)