Tweet
Email or share
A very good condition hand crafted pipe in the \"Hungarian\" long bowl style, sometimes styled as a \"Paul Kruger\". Around the bowl are carved the following : \"Ladysmith, Spion Kop, Talana, Pieters Hill, Colenso, Boer War 1899-1900-1901\". This item possibly made by a POW in Bermuda: NOTE: BOER WAR PRISONERS IN BERMUDA 1901 - 1902 Now that the centenary year has passed since the Boer Prisoners were held on the islands in the Great Sound, it is time to celebrate this important period in Bermuda’s history. Bermuda was chosen along with other isolated British colonies as suitable centres to keep the captured Boers so that they would have little chance of returning to the fight in South Africa. Various islands off Hamilton were selected for different groups: children on one, officers on another, those basically sympathetic to Britain on a third. Then there were those who might sign the oath of allegiance to Edward VII if it got them home sometime on a fourth and the irreconcilables, those who had sworn everlasting hostility to the Empire on two other rather inaccessible bits of rock. To amuse themselves and to make pocket money the Boers carved toys and implements, usually out of cedar. This was because cedar was the most common wood. However they would use anything they could get their hands on: pieces of old furniture, bones, coins, anything. Some they signed, some they didn’t. By 1903 very few prisoners were left in Bermuda, so whatever has that date on it is scarce. Even more rare is anything bearing a later date than that – 1906 for example, as only a couple of diehards remained, eking out a precarious living in a carpenter’s shop. They eventually wandered off or were absorbed into the community. [source:http://www.anthonypettit.com/BoerWar.html] 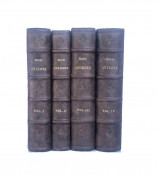