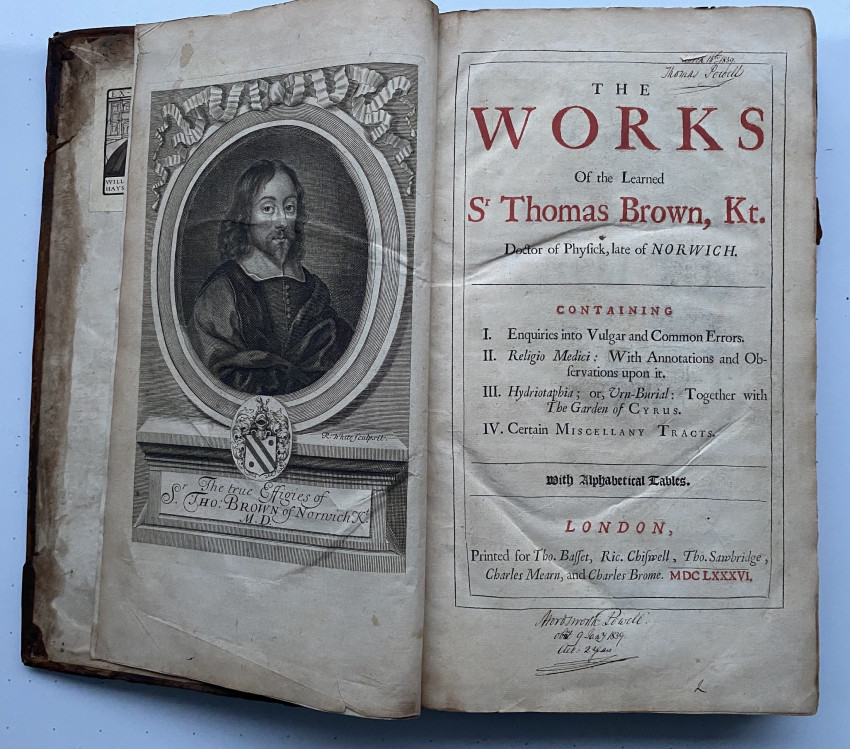 ‘Uriah Heep’s copy. - Thomas POWELL (1809-1887, poet, forger, editor and erstwhile-friend of Dickens, the Wordsworths, and the Brownings, amongst others). Sir Thomas BROWNE (1605-1682). The Works …. Containing I. Enquiries into Vulgar and Common Errors. II. Religio Medici: With Annotations and Observations upon it. III. Hydriotaphia; or, Urn-Burial: together with the Garden of Cyrus. IV. Certain Miscellaneous Tracts. With Alphabetical Tables. London: Tho. Basset, Ric. Chiswell, Tho. Sawbridge, Charels Mearn, and Charles Brome, 1686. Folio (13 x 7 1/2in; 330 x 190mm).  Pp. (18), 316 (11), (14), 102 (8), 52, (6), 68, '99-103' (i.e.69-73), (3). General title printed in red and black, each section with its own title.  Engraved portrait frontispiece of the author by R. White, and 2 engravings in the text, fine head and tail-pieces and initials, and two engravings in the text. (Portrait with repair to lower inner margin, S1 paperfault, small rusthole to Dd2, repair to tear in loer blank margin of Ss1,  repaired tear to Tt1.) Contemporary mottled calf (re-backed and -cornered, original spine label laid down, rubbed and scuffed, inner hinges reinforced). Provenance: Thomas Powell (inscribed twice, one dated March 1839, the second inscription recording the death of his infant son ‘Wordsworth Powell. / obit 9 Jany 1839 / Aet: 2 years’); William Charles Hays (1873-1963, architect, bookplate). First collected edition, this edition includes all of Browne's major works and encompasses the sum of learning of this remarkable polymath. This copy belonged to ‘a person of infamous character’, a ‘scalawag’: a poet and literary man who received encouragement and friendship from some of the great English literary figures of the day. He repaid them by turning to forgery (of their signatures and handwriting), he then escaped to the US and managed to continue his literary career in New York city. He is supposed to have been Dickens model for ‘Uriah Heep’. References: Keynes 201; Osler 4522; Wing B-5150.

Born in London on 8 August 1809 to Edward Powell and his wife Eleanor, this Browning acquaintance is described by G & M (p. 53, note 1) as “an admitted scamp, by whom Browning and some of his early friends were taken in.” By Maynard (p. 165) he is called “the poet’s scalawag acquaintance.” RB, in a letter to John H. Ingram dated 24 November 1886, discussed the origin of his relationship with Powell: “He obtained credit with [Thomas Noon] Talfourd, who introduced him to various friends and myself.” RB, in turn, introduced Powell to his set of friends in the Camberwell area, sometimes known as the Colloquials. Powell published a book entitled Poems in 1842, with a new edition appearing in 1844. (See Reconstruction, A1889, for a copy of the early version inscribed to RB; and E565, concerning suggested changes by RB which were incorporated into the 1844 edition.) A frequent contributor of poems to The Monthly Chronicle, Powell also published The Count de Foix (1842) and True at Last (1844), a copy of the latter being given to RB (see Reconstruction, A1890). It appears that Powell was among the first persons to know the secret of RB’s authorship of the anonymously-published Pauline (1833). RB’s father was to some degree acquainted with Powell and wrote to him on 11 March 1843 about RB’s efforts to destroy as much of his own juvenilia as possible (Orr, pp. 32–33). It was at the home of Powell in the mid-1840’s that RB met George Murray Smith, who was eventually to become his publisher. Powell borrowed from RB a copy of the Pisa edition (1821) of Shelley’s Adonais (Reconstruction, A2092)—which RB valued considerably—and sold it (LRB, p. 373, note 86:4–2).

In a biography of R.H. Horne, The Farthing Poet (1968, pp. 114–115), Ann Blainey relates that it was Powell who interested Horne in a modernization of Chaucer’s poems. Horne became editor of the project, with Powell as a collaborator (although, as Ms. Blainey observes, one wonders why Powell did not undertake the editorship himself). Another collaborator was EBB, with two contributions (Reconstruction, D757–758). The Chaucer work was published in 1841. When EBB felt it necessary to defend Horne in a letter to Mary Russell Mitford (18 July 1841), she cited Powell as one of his friends, and as “a very dear friend also of Wordsworth’s.” She went on to say: “Mr. Powell has written to me two or three times, & sent me his poems, which are marked by poetical sentiment & pure devotional feeling, but by no remarkable power.” On 21 March 1842 she mentioned him to Miss Mitford as “a friend of all the poets.”

By 1846, some of the poets were changing their opinions of Powell. In a letter to EBB on 11 January of that year, RB called him “a buyer of other men’s verses, to be printed as his own.” He also told of an attempt by Powell, who was a joint proprietor of The New Quarterly, to defraud a writer, presumably RB’s friend Joseph Arnould. Then, after expressing curiosity as to what EBB knew “of this Mr Powell,” RB said: “Do not write one word in answer to me .. the name of such a miserable nullity, and husk of a man, ought not to have place in your letters.” A few months later, writing to EBB on 16 May, RB commented that their mutual friend R.H. Horne was saying “kind things about my plays—and unkind things of Mr Powell ‘a dog he repudiates for ever’.” When Powell was on friendly terms with RB and numerous other English writers he often imitated their signatures, supposedly just for amusement. It later became clear that he was putting his imitative skill to more serious uses. By 1849 he was deeply involved in charges of forgery and embezzlement. Escaping criminal prosecution through a claim of insanity, he fled to New York and there continued his literary career. In The Living Authors of England (1849), he superlatively praised EBB—at a time when she probably no longer cared much about his opinion. Stanley J. Kunitz and Howard Haycraft, in American Authors 1600–1900 (1938), discuss his literary activities on both sides of the Atlantic without any reference to blots on the British portion of his career, and cite him as “a lively ‘John Bull’ member of the coterie of ‘lions’ that gathered at the famous Pfaff’s.” He died on 14 January 1887. Writing to F.J. Furnivall on 15 October 1883, RB referred to Powell as “a person of infamous character,—an unparall[el]ed forger, who only escaped transporation thro’ the ill-deserved kindness of his employers,—and who, premeditating a defence of ‘inborn and ineradicable dishonesty’, actually practised forging on every possible occasion,—would send you, for instance, a letter signed ‘Dickens’ or ‘Thackeray.’” RB then added: “I heard he had libelled me—who found him out earlier than most of his dupes.”

For more details of his criminal activities, see Wilfred Partington, Should a Biographer Tell? [1947].”