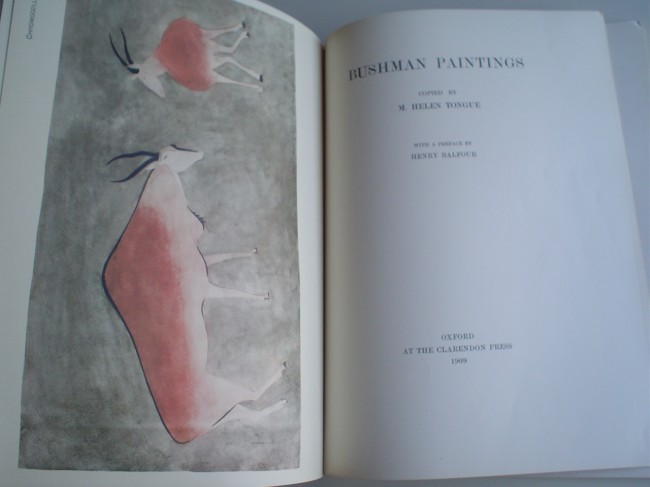 Published: At the Clarendon Press, Oxford, 1909

Email or share
Copied by M. Helen Tongue, with a preface by Henry Balfour.

48 page booklet containing 2 chromocollotypes - 1 double page and 4 plates, preface, introduction, notes on the Bushmen and list of plates with 1 loose sheet with 2 maps, 54 loose colour plates of Bushman paintings, all contained in a fitted box (box in poor condition).

M. Helen Tongue was a school teacher at Rockland Girls’ High during the 1890s and 1900s in the town of Cradock in the Eastern Cape, South Africa.

It was here that she met Dorothea Bleek, daughter of famous San linguist and ethnographer, Wilhelm Bleek.

Tongue’s Eastern Cape copies are her earliest. Her first copy was made on a farm in Molteno District. In this early work, she worked alone. But, the bulk of her copies were made during three longer fieldtrips beyond the Eastern Cape border, together with Dorothea Bleek.

At the beginning of 1906, Tongue and Bleek made a train trip from Cradock to Bloemfontein and Ladybrand (Free State), where they recorded various rock art sites. Most of the sites visited were located by using the descriptions of George Stow.