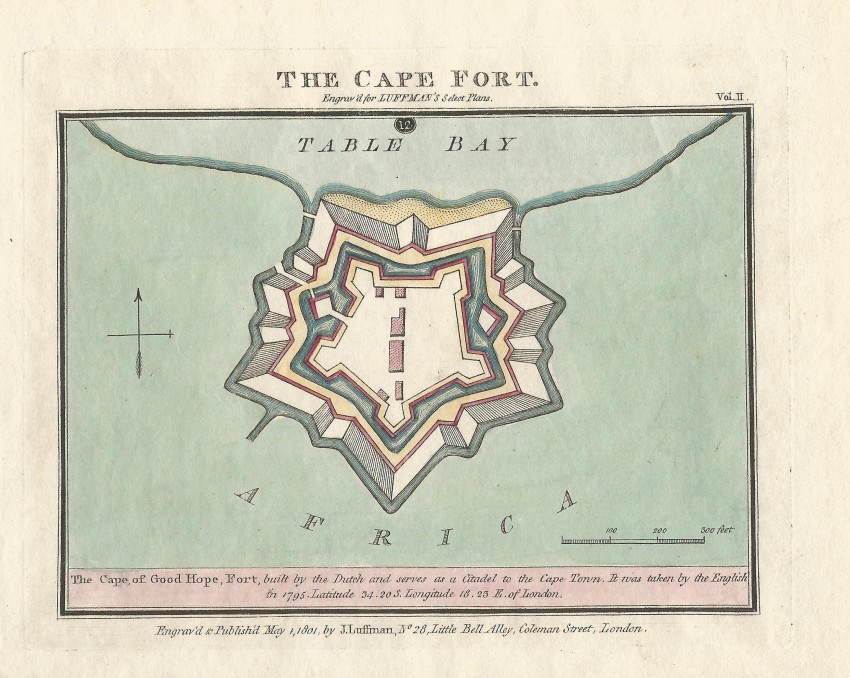 This 1801 diagram of The Cape Fort is of the fortification we now know as The Castle. Luffman’s ‘Cape Fort’ was engraved on a copperplate, printed and then hand-coloured: it is in the original colour, as it appeared as Plate 12 in the second volume of is book on the world’s principal cities, harbours and forts.

The stone Castle replaced the original wood and mud Fort de Goede Hoop which was located close to today’s Golden Acre Center on the corner of Strand and Adderley Streets. Heavy rain in 1663 caused the near collapse of the fort. I

In January 1666, work began under commander Zacharious Wagenaer on a stone fortress which was ready for occupation only in 1674. The original fort was then demolished. Most of the rock used to build the Castle came from the Strand Street Quarry but the stone in the gateway came from Robben Island (now housed in the Granary in the Castle).

The annotation below the drawing, records the fall of the Cape to the English in 1795 and has association with Cape Schools. After the Battle of Muizenberg, the victorious British troops marched from Simonstown, through Muizenberg Pass, behind Zandvlei, down Military Rd, past Dreyersdal and past the Wynberg Military Camp (then about the Diep River, i.e. below the Wynberg itself – near Norman Henshilwood school). The surrender was signed at Rustenberg, now the site of a school in Rondebosch.

John Luffman was an engraver, publisher and goldsmith working out of London who produced a number of publications with maps.

This chart is in original colour and in fine condition. A scan will be posted on Monday 8th