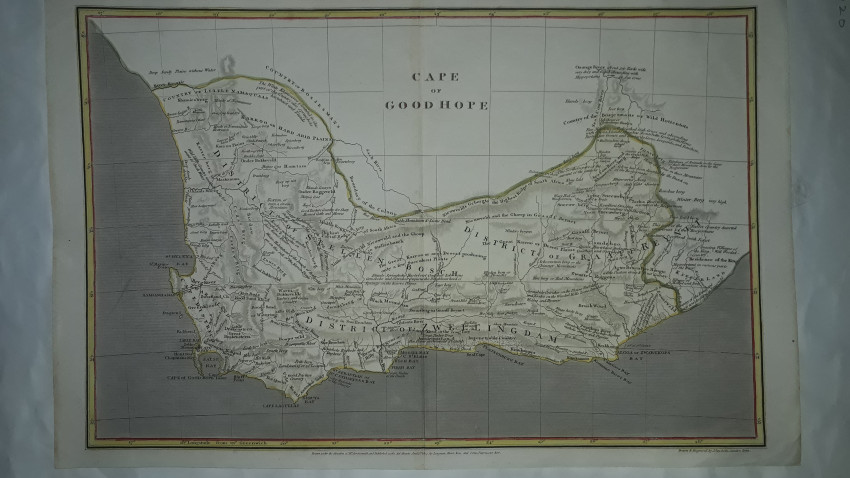 This attractive and historically imortant map of the Cape of Good Hope is by Aaron Arrowsmith (1750 – 1823), England’s premier cartographer of the early nineteenth century, and patriarch of a famous family of cartographers.

The map was engraved on copperplate by John Cooke, “Drawn under the direction of Mr. Arrowsmith, and published as the Act directs, Jan 1st, 1807, by Longman, Hurst, Rees, and Orme, Paternoster Row”. It  was published in the sixth volume of the 43-volume The Cyclopaedia; or, Universal Dictionary of Arts, Sciences, and Literature by Abraham Rees D.D., F.R.S., F.L.S. (1743-1825), an eminent Welsh minister.

This map is a reduction of the first large format map of the Cape Colony by Arrowsmith (18020); he used up-to-date information and this and the large format map used information from John Barrow’s famous map and book. This map of the Cape by Arrowsmith is crammed full of fascinating commentary, from Barrow, on the Cape at the end of the 18th century; there are numerous annotations on the distribution of wildlife, agricultural opportunities, forests in the Southern Cape and even human movement (e.g. transhumance in the Roggeveld: "winter habitation of the people ... ”).

Arrowsmith map also identifies important outspans along the old ‘highways’, e.g. the famous Heer Lodjiement, today’s Heernlogement, a ‘difficult to find’ cave, actually a rock overhang, a Provincial heritage Site near Clanwilliam, with a 300 years-old wild fig growing out of a crack in the cave wall - the names of scores of travellers are engraved into the cave wall.

"Bushman painting” is identified near the north-eastern corner of the Colony at the site van Plettenberg’s Beacon (near Toor Berg, i.e. Colesberg in the Karoo), erected in 1778 after the slaughter of more than 20 hippos in the ‘Sea Cow River’ by the party of the Governor and Robert Gordon (who named the Orange River, to the north of the beacon). The resistance of the ‘Bosjemans’ at their traditional hunting ground in the region of the beacon is recorded, the first cartographic record of this resistance that also resulted in the destruction of the small stone beacon (fragments now in the Iziko museum).

This map is a scarce, historically important cartographic snapshot of the Cape Colony in the early nineteenth century by a leading cartographer of the time; it is an asset that will appreciate.

Reference: Tooley's Collectors' Guide to Maps of Africa .... p 17
Not in Norwich

IN THE GRIP OF THE NYIKA