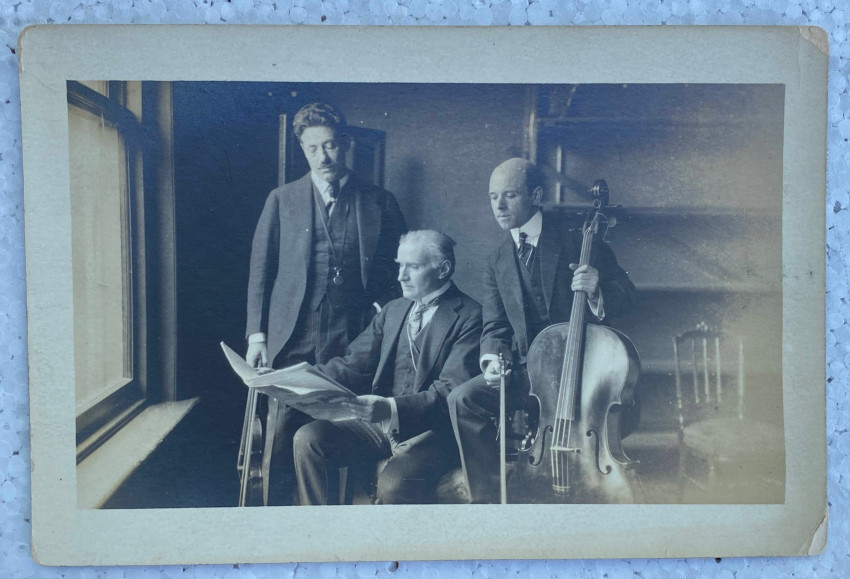 A vintage group photograph of Pablo Casals, Walter Damrosch & Fritz Kreisler, a ‘proof’ for a RPPC. [No place but NYC?: no date but 1917?].  photograph on thin card stock (4 x 6 inches; 102 x 153mm), pencilled notes to verso: the names of the sitters, together with the names of the 16 individuals who ordered a copy of the image from the photographer. Condition: some fading to the left margin.

An original photographic negative: an alternative image of Casals, Damrosch and Kreisler, with all three figures standing and looking towards the camera, Kreisler holds violin and bow. Condition: slight waviness. From the same session as the photograph above.

Fine images of three of the greats of Classical Music in the 20th century - apparently unpublished?

New York Times obit., December 20th 1954: “Emil Mix who played tuba with Sousa’s Band and later became well known as a manager of musicians and musical organizations, died Saturday afternoon of a heart attack while shopping on the closing day of Wannamaker’s department store.” He was also a gifted and enthusiastic photographer who seems to have made his ‘hobby’ pay for itself by producing RPPC which he sold to his colleagues: he was one of two semi-official photographers who recorded the off-duty life of the Sousa Band during their great world tour of 1911, for example. He was also a cinematographer – short ‘home movies’ of the Sousa Band are known. (2)