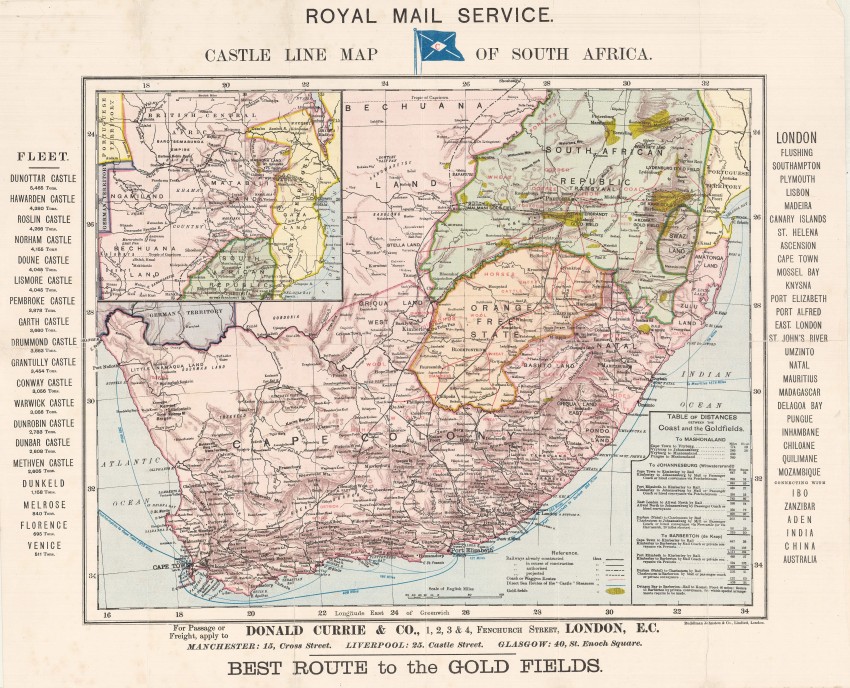 Best route to the goldfields

This is a fascinating and very informative map of South Africa in 1892 - arguably the first tourism maps! It is also scarce - probably because of the flimsy paper on which it was printed (by chromolithography). It was printed six years after gold was discovered on the Witwatersrand and in the year that the Cape railway reached Johannesburg in the South African Republic (Transvaal).

The map's primary focus is transport for tourism and for those in search of the gold fields: sea, rail and wagon or coach. The wagon and coach routes are limited to those that connect rail routes. It provides travelling distances and even numerous travelling times.

The map also highlights the numerous commercial products from mining and agriculture. The Castle Line, owned mainly by Donald Currie & Co (of Currie Cup fame) was one of two companies to be granted the licence to operate a mail shipping service between England and South Africa. The map lists and shows the routes to all key ports where the Castle Line called. The ships in the fleet are listed in a column outside the map.

The skeleton of the county's railway network was advancing at a rapid rate in the last two decades of the 19th century. This was driven economically by diamonds and other commercial products and directed by the Cape Government that started almost simultaneously to construct the railways from the three key ports at a time when there was no industrial infrastructure - all was imported. The completed railway lines (especially those ending at Vryburg, Charlestown, Komatipoort, Viljoensdrift and Graaff Reinet) lead one to the conclusion that the map was published at the end of 1891 but probably in 1892.

Tears long fold lines have been professionally repaired behind the map. The map was foxed but this has been treated naturally (bathing in neutral spring water and exposed to sunlight for three hours) and the paper de-acidified.

This very uncommon map (only one other sale recorded on the Web) will be stunning if framed and definitely will be a conversation piece. An ideal purchase for someone in the tourism or related industries.

References: this map is not in Tooley or Norwich.