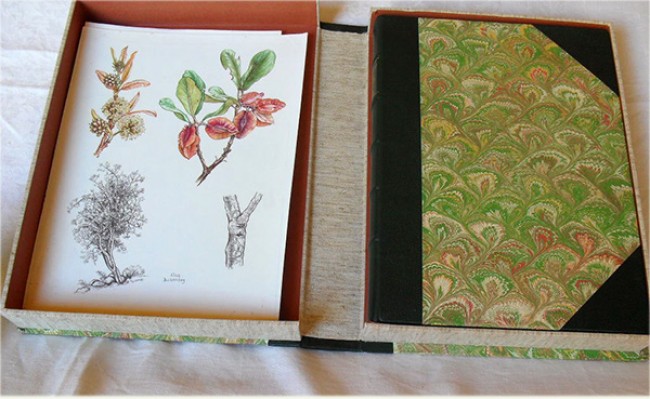 Denzil Carr was an engineer by profession and a botanist by inclination, authoring the standard works on Southern African Acacias and Combretaceae. The latter work was published in standard and subscribers' editions as well as a very limited editions of six sponsors' copies.

These six sponsors' copies, of which this is No 2, were half-bound by Peter Carstens of Johannesburg in different colours of goatskin (this is the green copy) and marbled paper, with gilt lettering to the spine of the book and of the quarter-bound matching solander case in which the book is presented and preserved. The sections are hand-sewn and the binding has head and tail bands and five raised spine bands. The top edge is gilt. The outer endpapers are single-sided brick-red sheets, augmented by three leaves of plain endpapers front and back. The text of this edition is printed on Hahnemeuhle acid-free laid paper from Germany.

In the solander case of this copy are four proofs of the 17 colour plates for the book by Elise Buitendag signed off by the author. These feature Combretum moggii, Pteleopsis myrtifolia and two Terminalias, prunoides and sericea, and are suitable for framing.

There are in addition more than 300 photographs, distribution maps and other monochrome illustrations in the text.

One of the copies of this edition is in the Special Collection of the National Botanical Gardens library at Kirstenbosch.

This copy is in mint condition. The condition of the solander case is also close to mint, despite a very slight bump to one of the corners. This may be one of the finest examples of botanical book production to have appeared in the past fifty years or more.

The Plants of Southern New Jersey

A Pictorial History of the Transvaal and South Africa. Nearly 200 illustrations and six specially&hellip;

The Elite. The Story Of The Rhodesian Special Air Service.