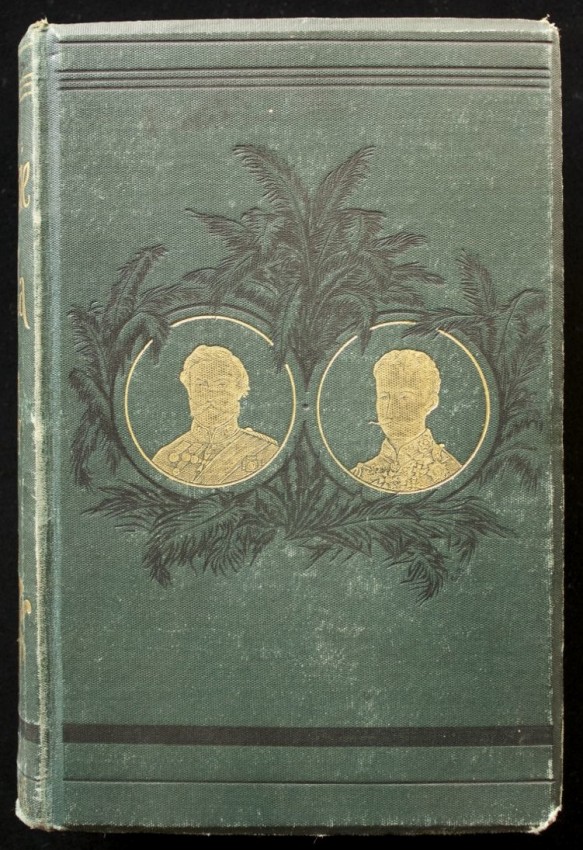 Coomassie and Magdala. The Story of Two British Campaigns in Africa. (1874)

Binding tight with some age-associated rubbing along the edges. Internally in very good condition.

Henry Morton Stanley was Special Correspondent to the New York Herald newspaper and reported on several conflicts; in the 1860s, he witnesed two successful British military campaigns in Africa; the battles for the towns of Coomassie and Magdala.

The British soldiers not only fought hard against the enemy, but also had to endure extremely harsh and gruelling climatic and geographical conditions. In particular, the fight for Coomassie took place in thick jungle and swampland; many of the troops who survived the battle were later to fall victim to malaria and other diseases.

Stanley remarks in his preface: "Coomassie was a town insulated by a deadly swamp. A thick jungly forest - so dense that the sun seldom pierced the foliage; so sickly that the strongest fell victims to the malaria it cherished - surrounded it to a depth of 140 miles seaward, many hundred miles east, as many more west, and 100 miles north. Through this forest and swamp, unrelieved by a single novelty or a single pretty landscape, the British army had to march."

Sir Robert Napier's 1868 campaign in Abyssinia (Ethiopia) was conducted against Emperor Theodore, who was holding foreign hostages in his mountain fortress, Magdala. The fortress was stormed, his hostages were freed, and Theodore himself committed suicide.

Sir Garnet Wolseley's successful Kumassi campaign (1873-74) was carried out against King Koffee and the Ashanti in the jungles of what is now Ghana and Sierra Leone.

The victories were highly praised back in England and were widely thought to be some of the toughest battles of the period.

Stanley's reports on the Abyssianian campaign, the earliest received even in London, established his reputation as one of the leading journalists of the time while his bravery in the march to Kumassi won him the highest respect of Wolseley and other English officers.