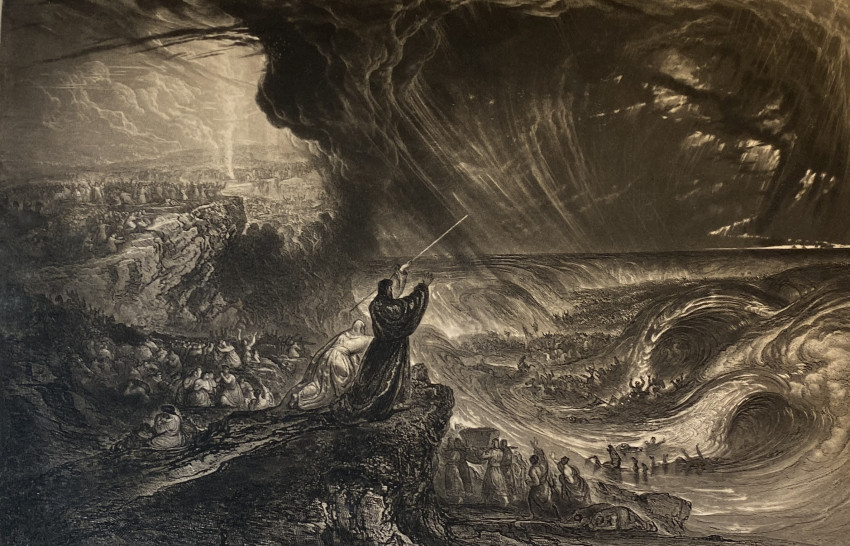 De Mille's copy of Martin's Illus. to the Bible

A spectacular series of images from John Martin – an artist who was clearly a significant influence on De Mille. This copy is from De Mille’s own library, with his bookplate.

Wikiart describes Martin as an artist who ‘was celebrated for his typically vast and melodramatic paintings of religious subjects and fantastic  compositions, populated with minute figures placed in imposing landscapes. Martin's paintings, and the engravings made from them, enjoyed great success with the general public—in 1821 [Sir Thomas] Lawrence referred to him as "the most popular painter of his day"’.

Just over one hundred and twenty years later, with a couple of substitutions, very similar things could have been said of De Mille: a filmaker who ‘was celebrated for his typically vast and melodramatic cinematic set-pieces of religious subjects and fantastic  compositions, populated with minute figures placed in imposing landscapes. De Mille’s movies enjoyed great success with the general public… ‘

Gustave Dore is credited as being De Mille’s favorite artist, but John Martin seems to have come a close second: compare ‘The Destruction of Pharoah’s Host’  (the 12th plate in the present work) with the scene in the De Mille’s 1956 version of ‘The Ten Commandments’, where Moses (Charlton Heston) though God’s grace commands the parted Red Sea to engulf the Pharoah’s army (see the French poster for the movie).