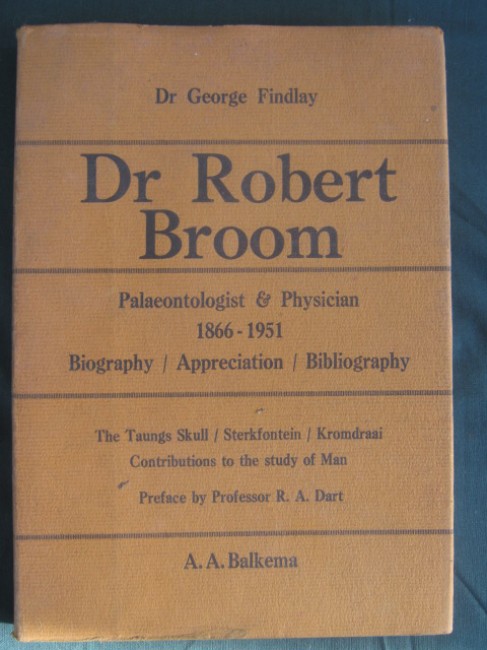 This, the authoritative biography of the person acknowledged as one of South Africa's three great palaeontologists (with Dart and Philip Tobias), was partly based on material for an autobiography passed to one of Broom's sons, who subsequently declined the opportunity in favour of Findlay, the present author.

Perhaps the most remarkable aspect of Broom's 85-year life is that he was a medical practitioner for forty years between his early achievements at Victoria College, Stellenbosch, in the field of marsupial palaeontology and the last 17 years of his life, when as an elderly staff member of the Transvaal Museum he carried out the major work of his life in the field of man's predecessors, including the australopithecines. Until he joined forces with J T Robinson, the co-author of many of his later publications, he preferred to work on his own. These publications - no fewer than 456 in number - remarkably included several on postage stamps and one recording an aloe named after him.

Quarter-bound in brown simulated leather and tan cloth, gilt to the upper panel and the spine, this book, despite making use of typewriter-generated camera-ready copy, epitomises Balkema's high production standards, including a superbly informative typographical tan cartridge dustjacket and excellent paper stocks for the xviii + 157 pp of text, chronology, bibliography and index and the 32 pp of inserted plates.

Unmarked and undiscoloured, this is a superb copy in every respect.