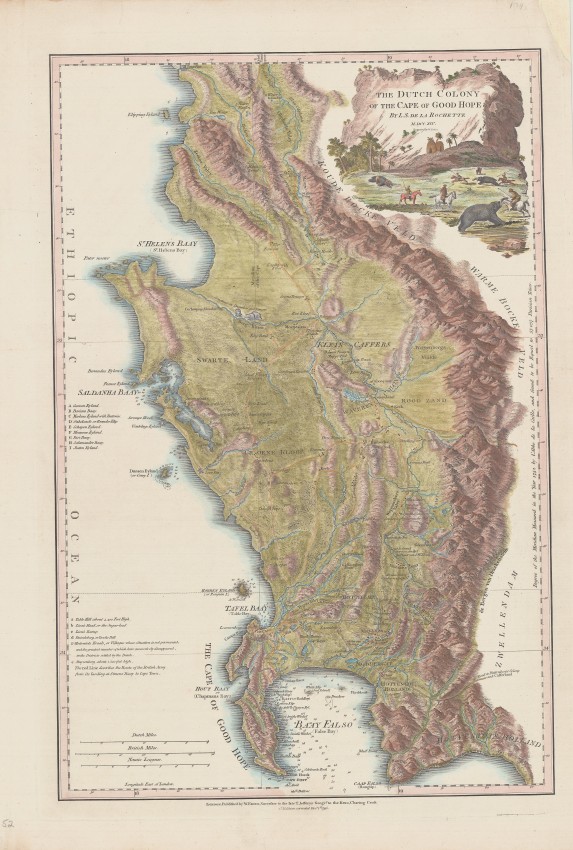 Dutch Colony of the Cape of Good Hope

This is one of the most fascinating maps of the Cape of Good Hope; it was published in 1795, the year that the English captured the Cape after the Battle of Muizenberg. It is a sought-after, historically important, attractive and highly desirable milestone in the history of the mapping of the Cape.

Louis Stanislas de la Rochette (who later adopted his wife's surname, D'Arcy, to add to his first names) compiled his map in 1782, when it first was published with the same title. He used a number of primary sources, some up-to-date and some that were almost a century old, albeit historically important; the map met the English need for a more accurate map of the territory in which it had become increasingly interested.

In August 1795 the English captured the Cape from the Dutch VOC after the Battle of Muizenberg. In the same year, this new edition of the map was published with numerous name changes. Despite the English victory, De la Rochette and William Faden, a leading English cartographer and publisher, did not change the title of the map from Dutch Colony to The English Colony of the Cape of Good Hope.    The map is even more fascinating because it is records information that was a century old.

The map includes some of the places visited by Simon van der Stel’s party in their journey into Namaqualand. It features the names of some of the first settlers, most deceased when the map was published, in the area between Table Bay and the Hottentots Holland Mountains (ca. 1675 – 1705). It shows the network of wagon roads in the colony in the 18th century; the routes of a number of these roads are still followed by modern arterial roads.

The map also names places that were prominent in the first scientific land survey, undertaken in 1752 by the French astronomer, Nicolas Louis de la Caille; e.g. Vygekaraal, Contreberg near today’s Darling and the mountain, Riebeeks Kasteel; De la Rochette also shows De la Caille’s terrestrial meridian and, along the right axis, gives its length, across a degree of latitude – an uncommon but important record. Saldanha Bay and the coastline to St. Helena Bay were copied from De la Caille and famous French Hydrographer d’Après de Mannevillette ... and were not accurate.

This map was published again in 1825 and 1838, but James Wyld, the son and the new owner of the publishing business, did not keep this map up to date with changes in the rapidly expanding colony (which he did on other maps); he did, however, remove reference to Dutch occupation of the Cape! A German edition of this popular map was published by Franz Schrämbl in 1789.  As more up to date maps were published, De la Rochette’s attractive and once popular and important map became of historical interest only.

This attractive, later hand-coloured map of the Cape of Good Hope remains historically important.This coloured example of the 1795 landmark map of the Cape of Good Hope was printed on firm paper and is still in very good condition - a small area of loss at the top right has been professionally filled in - it does not detract from this map; the wide margins make this map ideas for framing. 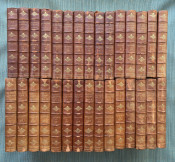