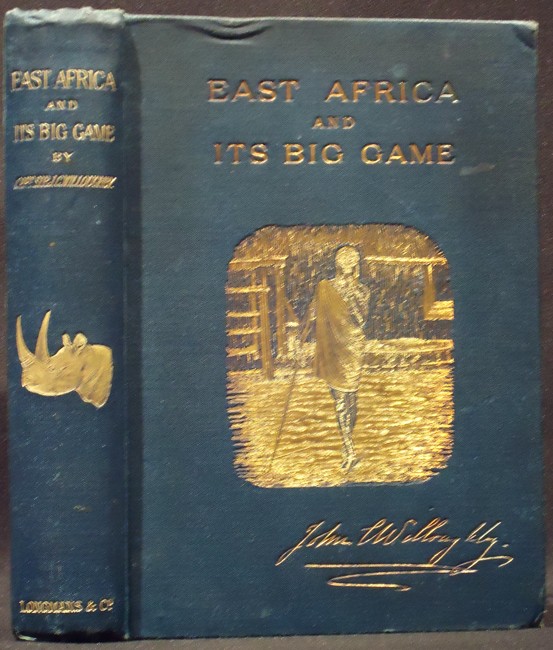 EAST AFRICA AND ITS BIG GAME

With a postscript by Sir Robert G. Harvey, Bart.

xii, 312 pages, frontispiece and 17 plates - 4 of animal heads have tissue guards with descriptive captions, folding map. Original dark green cloth with gilt titling and vignette on the upper cover, original black endpapers, contents bright. Tipped onto the front free endpaper is a sheet of folded note paper with the address 2, Down Street, Piccadilly, W., on which the author has written, 'Dear Madam, Herewith my autograph as requested, Yours faithfully, John Willoughby.' Also tipped is a portrait of the author and a biography. A very good copy.

The biography records his life as follows, 'Willoughby, Sir John Christopher (London, 20.2.1859 - London, 14.4.1918. He was educated at Eton and Cambridge and entered the Oxford Light Infantry as a lieut. 1879. He was commissioned in the Royal Horse Guards and served in Egypt in 1882 and in the Nile Expedition three year later. In 1890 he was appointed 2ic of the Pioneer Column. Willoughby was mainly responsible for the discovery of diamonds near Gwelo. During 1892 he conducted excavations at the Zimbabwe Ruins. He served in the Matabele War of 1893 as military adviser to Dr Jameson. In 1895 Lieut-Col. Willoughby took command of Jameson's Raiding force, for which he lost his commission and was sentenced to ten months imprisonment. During the South African War his commission was restored and he served through the Siege of Ladysmith as a member of the Cavalry HQ Staff. After the relief he serves a major under Sir Archibald Hunter, in charge of transport for the Flying Column for the Relief of Mafeking. He then served in Intelligence. After the war he continued his business interests in Rhodesia. Willoughby also served in WWI. He raised an armoured motor column for East Africa and served under Gen. Smuts and Gen. van Deventer. He returned to England in mid-1917 where he died of malaria contracted in East Africa. He was mentioned in despatches and awarded the DSO. He never married.'