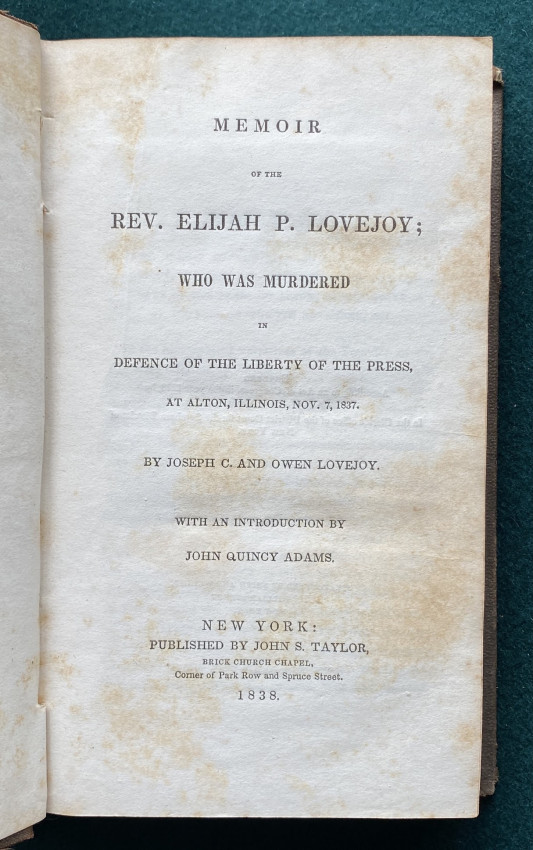 [FREEDOM of the PRESS, ANTI-SLAVERY.] Memoir of ... Elijah P. Lovejoy

First edition of a popular and influential work – one of the authors (Owen Lovejoy) was a prominent abolitionist like his murdered brother, but also a friend of Lincoln who went on to become a congressman. Elijah Parish Lovejoy (1802-1837) ‘… Elijah Parish Lovejoy (November 9, 1802 – November 7, 1837) was an American Presbyterian minister, journalist, newspaper editor, and abolitionist. After having moved his newspaper from St. Louis, Missouri to Alton, Illinois, he was fatally shot during an attack by a pro-slavery mob. They were seeking to destroy a warehouse owned by Winthrop Sargent Gilman and Benjamin Godfrey, which held Lovejoy's press and abolitionist materials.

According to John Quincy Adams, the murder "[gave] a shock as of an earthquake throughout this country".[1] "The Boston Recorder declared that these events called forth from every part of the land 'a burst of indignation which has not had its parallel in this country since the Battle of Lexington.'"[2] When informed about the murder, John Brown said publicly: "Here, before God, in the presence of these witnesses, from this time, I consecrate my life to the destruction of slavery."’ (wikipedia).

The present work was written by two of his brothers, the better known of whom was Owen Lovejoy. Owen ‘…migrated to Alton, Illinois, where his older brother Elijah Parish Lovejoy had moved in 1836 from St. Louis, because of hostility to his anti-slavery activities. The older Lovejoy was by then an anti-slavery Presbyterian minister who edited the Alton Observer, an abolitionist newspaper. The younger brother studied theology there. Owen was present on the night of November 7, 1837 when his brother Elijah was murdered while trying to defend the printing press of the Illinois Anti-Slavery Society from an angry mob. He is reported to have sworn on his brother's grave to "never forsake the cause that had been sprinkled with my brother's blood.” Owen and his brother Joseph C. Lovejoy wrote Memoir of Elijah P. Lovejoy (1838), which was distributed widely by the American Anti-Slavery Society, increasing Elijah's fame after his death and adding to the abolition cause.

Lovejoy served as pastor of the Congregational Church in Princeton, Illinois from 1838 to 1856. During these years, he also organized a number of the 115 anti-slavery Congregational churches in Illinois begun by the American Missionary Association, founded in 1846. His activities brought him increasing public prominence.

In 1854 Lovejoy was elected a member of the Illinois State Legislature.[1] He worked with Abraham Lincoln and others to form the Republican Party in the state, and he and Lincoln remained close friends. In 1856, he was elected as a Republican from Illinois as Representative to the 35th United States Congress and succeeding Congresses, serving from March 4, 1857, until his death.

In February 1859, Lovejoy responded to the Democrats' charges that by aiding runaway slaves and opposing slavery he was a "negro stealer", saying on the floor of Congress that:

Proclaim it upon the house-tops! Write it upon every leaf that trembles in the forest! Make it blaze from the sun at high noon and shine forth in the radiance of every star that bedecks the firmament of God. Let it echo through all the arches of heaven, and reverberate and bellow through all the deep gorges of hell, where slave catchers will be very likely to hear it. Owen Lovejoy lives at Princeton, Illinois, three-quarters of a mile east of the village, and he aids every fugitive that comes to his door and asks it. Thou invisible demon of slavery! Dost thou think to cross my humble threshold, and forbid me to give bread to the hungry and shelter to the houseless? I bid you defiance in the name of my God.

Lovejoy was a platform speaker in support of Abraham Lincoln in the famous debates with Stephen A. Douglas. While in Congress, he "introduced the final bill to end slavery in the District of Columbia," long a goal of the American Anti-Slavery Society. He also helped gain passage of legislation prohibiting slavery in the territories.[6] He was one of the few steadfast Congressional supporters of Lincoln during the American Civil War. Lincoln wrote, "To the day of his death, it would scarcely wrong any other to say, he was my most generous friend."

In an April 5, 1860 speech before the U.S. House of Representatives, Lovejoy castigated the Democrats and their racist justifications for supporting slavery, saying:

The principle of enslaving human beings because they are inferior, is this. If a man is a cripple, trip him up; if he is old and weak, and bowed with the weight of years, strike him, for he cannot strike back; if idiotic, take advantage of him; and if a child, deceive him. This, sir, this is the doctrine of Democrats and the doctrine of devils as well, and there is no place in the universe outside the five points of hell and the Democratic Party where the practice and prevalence of such doctrines would not be a disgrace.

As Lovejoy gave his speech condemning slavery, several Democrats in the audience, such as Roger Atkinson Pryor, became irate and incensed. Profoundly objecting to Lovejoy's anti-slavery remarks, the Democrats, brandishing pistols and canes, threatened him with physical harm, to which the Republicans present pledged to defend Lovejoy if the Democrats attempted to attack him. In response to the Democrats' threats, Lovejoy stood firm and responded, "I will stand where I please" and "Nobody can intimidate me." The day after the speech, it was re-printed in 55 newspapers across the country. Regarding the incident, Lovejoy stated in a letter to his wife Eunice that "I poured on a rainstorm of fire and brimstone as hot as I could, and you know something of what that is. I believe that I never said anything more Savage in the pulpit or on the stump.”’(wikipedia).