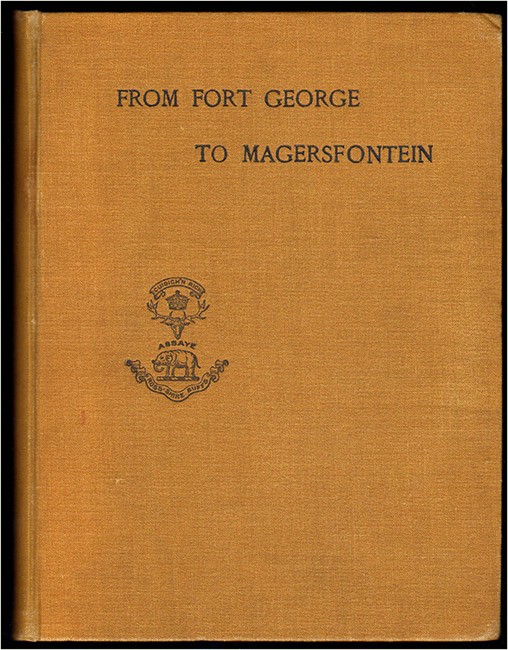 Published: Privately published, No date (circa 1900)

ii + 104 pages, photogravure portrait of Lt. Cowie as frontispiece, 1 sketch in the text and a sketch plan of the Magersfontein battlefield showing where Lt. Cowie was killed and where he was buried, khaki cloth titled and decorated with regimental crest in black on the upper cover.

The text is reproduced directly from typed pages.

A note on the front paste-down endpaper reads, \'Mrs F.... Cowie, June 1900 (crossed out) My own copy F....Cowie. Few words altered in the other copies.\' Possibly Lt. Cowie\'s mother. (see illustration below)

Not in A South African Bibliography or the British Library.

Wright & Lloyd: The Great Boer War, a catalogue issued in December 1978 comments. \'On of the most poignant private printings to stem from the war. Almost certainly compiled by Lt. Cowie\'s family after his death at Magersfontein, the volume contains his letters up to the date of the battle followed by as much material and the compilers could collect on the action itself. A work of importance to those interested in the regiment, the Highland Brigade or students of this major battle. The book appears to have been offset printed directly from typed pages. One other copy is known to exist but it is not known if the original letters have survived or, indeed, how many copies of this work are still in existence.\' page 31.