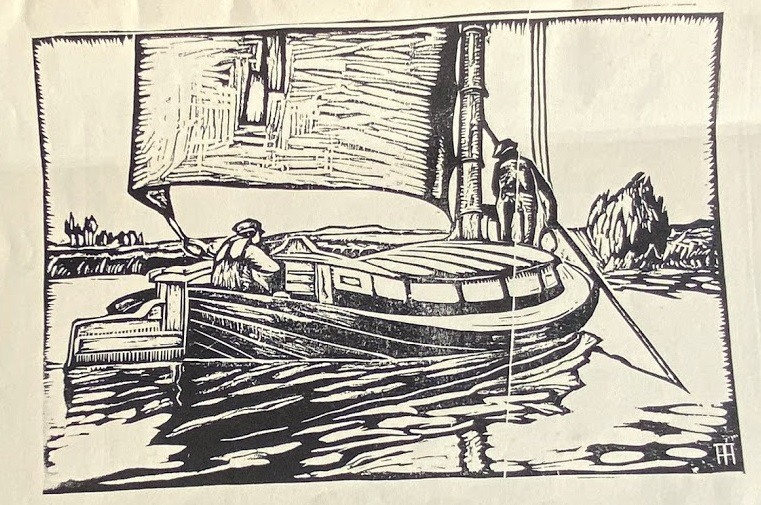 Horace Walter TUCK (1876 -1951, artist). [An assembled album of original woodcuts. Norfolk, England: one print dated 1947, otherwise undated]. Quarto (11 ½ x 9in; 292 x229mm). 1 small format leaf with a short copy typescript biography of the artists tipped onto the upper inner cover, 31 woodcuts ([see images] 8 x 11 1/4in. and smaller) by Tuck on 24 sheets of wove paper, 20 initialled or monogrammed in the plate. Sewn (using a ribbon) into original drab paper wrappers (some creasing and light surface damage to wrappers).

An interesting collection of woodcuts – the best are very good. Tuck’s work has been compared to Ivon Hitchens and Paul Nash (see below), and his work has garnered renewed interest in the last decade. Tuck “lived for the greater part of his life in Norfolk and Norfolk was the inspiration for his best work. In this respect, he carried on to some degree the traditional  Norwich School. He painted chiefly in oils and watercolour but had a fascination for wood block cutting. He was a trained observer and had a fine sense of form, as the many figureines he carved in various materials will testify. As a man he had a dry sense of humour which came out often in the articles he occasionally contributed to various Art Journals. Several books were illustrated by him, one in particular was the now established classic on Norwich inns and taverns by Walter Wicks.” (taken from the typescript at front of the present album).

“Mainly a painter of oil and watercolour landscapes of his native Norfolk in England, Horace Tuck also travelled to France (particularly Dinan in Brittany), the Lake District and other parts of Britain on painting expeditions. Tuck's work was regularly exhibited in Norwich (he was a member of the Norwich Art Circle) and in London galleries, including in Bond Street. Apart from his earliest works, his paintings tend not to be dated. He trained at Norwich School of Art, where he became friendly with Alfred Munnings, and at Borough Road Training College, Isleworth, West London.

Horace Tuck also illustrated books on local subjects, including Inns and Taverns of Old Norwich. His wife, Elizabeth Mary, known as Bessie, was originally one of his pupils and an artist in her own right. They were married in 1910 and lived in Branksome Road, Norwich, until Tuck retired in 1939. They then moved to Sherimgham, on the Norfolk coast, where Tuck continued to paint until his death aged 75. … Horace Tuck's paintings have occasionally turned up at auction in the past, but a discovery of around 200 of his paintings and a major exhibition in Holt, Norfolk in 2006 (with another scheduled for early March 2008) has created renewed interest in the artist. His later style has been compared by Simon Butler (in Lost Norfolk Landscapes: Paintings by Horace Tuck) to the work of British artists Ivon Hitchens and Paul Nash, suggesting that, despite Tuck's conventional choice of subject matter, he was not immune to the influences of modernism. Some of his works are in the collection of the Norwich Castle Museum and Art Gallery.” (wikipedia)